Ohanaeze Ndigbo: When Presidency is not about Ethnicity or Religion 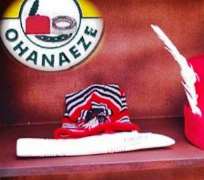 In a space of less than two weeks, the apex Igbo socio-cultural association, Ohanaeze Ndigbo, has endorsed the presidential candidacy of the Peoples Democratic Party, PDP, at the forthcoming presidential election. First, it was the National Executive Council of Ohanaeze that endorsed the Atiku/Obi ticket on Tuesday, January 22, 2019 in Enugu. Two days later, precisely on Thursday, January 24, 2019, the Imeobi of the group ratified the endorsement by the National Executive Council before it joined other leading socio-cultural groups from across the country in further sealing its endorsement of the PDP candidate.

If there was any doubt as to the chastity of the endorsement of Atiku by Ohanaeze Ndigbo in its previous meetings, such doubts quickly disappeared into thin air on the day the body met with the Northern Elders Forum, Afenifere, PANDEF and the Middle Belt Forum and, with one voice from across ethnic and religious divides, loudly endorsed the Atiku/Obi ticket on the platform of the PDP.

However, there are still pockets of unrepentant rumour mongers and peddlers of falsehood among the current ruling party, who are bent on reading ethno-religious meanings into Ohanaeze’s endorsements. Such merchants of lies have gone about town saying that Ohanaeze Ndigbo endorsed the Atiku ticket based on ethnic reason because their son, Peter Obi, is a running mate to Alhaji Atiku Abubakar, therefore urged other ethnic groups to ignore such endorsements.

History will always be kind to those whose actions are based on the principles of equity, fairness and justice, no matter how long it takes. Such sophists who have gone about town accusing Ohanaeze of ethnic bias in its endorsement of Atiku have either chosen to deliberately forget, neglect or fail to remember that the Igbo as a race, absolutely and unreservedly, rejected this same Buhari in 2003 when he had one her most illustrious and flowery sons in the late Chuba Okadigbo, former Senate President, as his running mate in that year’s presidential race.

Despite parading the towering Chuba Okadigbo as his running mate in 2003, the Igbo turned their back on Buhari and settled for the Obasanjo/Atiku ticket which was a Yoruba/Fulani ticket.

The same scenario played out in 2007 when Buhari also selected another influential Igbo son, Chief Edwin Ume-Ezeoke, as his running mate in the presidential contest. In its usual characteristics of aligning itself with candidates of truly progressive, prosperous outlook and possession of democratic values, the Igbo, for a second time in a row, turned its back on one of its own in Ume-Ezeoke, supported and voted for the Yar’adua/Jonathan ticket which was a Hausa-Fulani/Ijaw ticket. It did not even matter to the Igbo that one of their own sons was in the presidential race on a joint ticket with Buhari.

The truth is that it does not essentially matter to the Igbo who is president, what matters to the people, and this has always been their guiding principles in supporting whomever they support in Nigeria’s presidential race over time, and like the Ohanaeze themselves mentioned, is “…its collective search for a polity that is just, egalitarian and inclusive…”.

As it stands today, Buhari does not fit into that bill. Never has our nation been so officially divided along ethnic and religious lines through the unchecked utterances and actions of the president himself and his followers.

The security situation in the country is appalling. Some analysts have said that the number of Nigerians murdered by terrorists, herdsmen, kidnappers, cultists and such other violent groups in just the last three and half years of Buhari’s presidency is far more than the number recorded between 1999 – 2015.

The most incredulous thing about such murders is that even the president and his officials have explained away a great number of them without the perpetrators, especially as it concerns the ones committed by herdsmen, being arrested. It was under this same Buhari that soldiers descended heavily on sleeping Shiite Muslims in their camp in Zaria and allegedly murdered hundreds of them in cold blood. As we speak today, rather than bring the few perpetrators of such heinous crime to book, it is their leader, Sheikh El Zakzaky and his wife, that have continued to be held in illegal custody since December 2015 despite several court orders granting them bail.

Needless to talk about the thousands of our fellow citizens who have been sacked from their ancestral homes and their families scattered far and wide apart from one another by armed herdsmen and are today taking refuge in other lands in some of the most dehumanizing conditions while the herdsmen have taken over their communities and farmlands without any help for the displaced or justice for the murdered but justification of the aggressors by government officials. The situation is so bad that some governors had to cry publicly about it.

Never in the history of our land has any democratic institution like the judiciary and the legislature been so aggressively abused and attacked officially by the executive arm of government like we are experiencing today.

Under Buhari, millions of Nigerians have lost their jobs, the same jobs they got while PDP was in power as a result of the robust economic policies of the party that sustained our economy which was rated very highly by reputable international organizations. In just three and a half years of Buhari’s presidency, hundreds of factories have closed down while investors keep fleeing the country in droves due to insecurity and harsh economic policies of the Buhari presidency that have seen our exchange rate crash abysmally.

Hunger, suffering and hardship is so palpable in our midst that people can almost touch them on the streets of our nation, from Katsina to Benue, Zamfara to Anambra, Osun to Yobe etc, the story is the same everywhere you go. One can actually go on and on. In fact, it is a season of the eleventh plague in Nigeria.

The Igbo have always known that with Buhari, this is how it was going to be. So no matter how angelic or influential the Igbo sons he was selecting as running mates were, his candidacy never appealed to the highly politically discerning Igbo nation. Like we say in our local parlance, “all na wash”!

For those who want to use the endorsement of Ohanaeze to create bad blood between the Igbo and their Yoruba neighbours by saying that the Yoruba must stand by their son, the Vice President, Prof Yemi Osinbajo, let me quickly remind them that the Yoruba are too far more sophisticated than such a base gimmick. When Buhari selected the fiery Pastor Tunde Bakare as running mate at the 2011 polls, the Yoruba still voted against Buhari in favour of the Yar’adua/Jonathan ticket. That was a loud statement by the Yoruba that the destiny of our nation is beyond any ethnic or religious inclinations. It is based on competence, physical and mental fitness above all other factors. That is the lesson which every part of Nigeria has come to learn through this Buhari misadventure. The guns of murderers do not distinguish between Hausa, Igbo, Yoruba, Ijaw, Junkun, Fulani etc, neither does hunger, nor does hardship. If we vote because of tribal sentiments, and vote in gross incompetence and ineptitude, the sky falls over everyone, and what a disastrous fall that would be.

In conclusion, the fact that the Hausa/Fulani, the Igbo, the Yoruba, the Middle Belt and the Niger Delta, have come together with one voice, in spite of sharp differences in tongue, creed, religion and region, to say that they endorse the Atiku/Obi ticket of the PDP, sends a loud message to those who are still stuck in the past with parochial politics of pecuniary gains, that the rest of Nigeria has since left them behind.