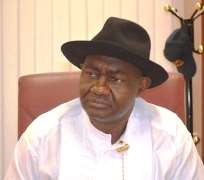 Senator representing Rivers South-East Senatorial District in the National Assembly, Senator Magnus Ngei Abe has said that the ruling of the Court of Appeal granting stay of execution to enable the All Progressives Congress (APC) appear on the ballot box in Rivers State is noted and welcomed as the court did not restore the name of anyone but merely gave a stay to enable the party prepare for the forthcoming general elections.

Abe, in a statement issued by his spokesperson, Parry Saroh Benson said the Court of Appeal sitting in Port Harcourt on Monday did not order the Independent National Electoral Commission (INEC) to restore names of candidates for the 2019 Governorship, State House of Assembly and National Assembly elections.

He said that it has always been of his view that what is required in APC Rivers is a dispassionate review of the issues in contention so that a clear and definite decision can be made on those to fly the flag of the party in the forthcoming elections.

“The statement reads in parts, “the facts are simple and sacred. A faction of the party led by the Minister of Transportation and the DG of the Presidential Campaign conducted congresses and indirect primaries in clear and open violation of the orders of a court of competent jurisdiction. This was done in the full glare of the entire country”.

According to Abe, the issue was taken up to the Supreme Court, and the court in its wisdom held that having disobeyed the court so openly they were not entitled to any relief from the courts. “This position was clearly set out in Ibrahim Umar & Ors Vs. APC as reported in Part 1650, 18. Nigerian weekly law reports at page 139”, he maintained.

He went further to say that all the actions based on that illegality was voided and remained void. “The judgment that is now being stayed was based in part on that position of the Supreme Court”. However, he stated, “what Nigerians are witnessing now is a desperate attempt to reverse the law to get the President to raise the hand of candidates that the law has said does not exist. The President’s decision to abide strictly to the correct legal position is the reason for the current pressure on the Judiciary”.

Senator Abe who is the Chairman, Senate Committee on FERMA congratulated their Lordships for the decision which according to him, is in line with the position of all Nigerians that APC must be on the ballot in Rivers State.

He further stated that the application to declare any faction as the authentic candidates of the party was specifically rejected. “That issue is the subject of series of pending litigations before Supreme Court and the Court of Appeal”, Abe added

“The indirect primaries did not hold by law, but the APC conducted a valid, and lawful direct primaries that clearly puts the APC on the ballot without legal entanglements.

“Let me assure all lovers of justice that a change of the judges does not automatically translate into a change of the law. Therefore, we should all remain calm. The struggle for justice in the party will continue until victory is achieved”, he stated.