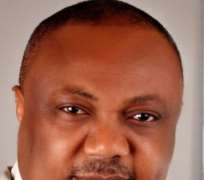 There are high indications that the governorship candidate of the All Progressives Congress (APC), Chief Great Ovedje Ogboru, may lose Aniocha south to his Peoples’ Democratic Party (PDP) counterpart and incumbent governor of Delta state, Dr Ifeanyi Okowa in the 2nd March 2019, gubernatorial poll.

A close ally to Ogboru, told our correspondent that from what he saw in a meeting of Aniocha north APC, the people are allegedly after what they would get on the immediate and not the gains in the future if the governorship candidate wins the election.

He said although, some of Ogboru’s supporters are out to push more harder, the APC guber candidate should not have more hope from the council as they are purportedly after money.

According to our source who has followed Ogboru since 1993, said, “I don’t think Ogboru will win Aniocha south. I was so angry with them in the Aniocha south meeting; they are just after the money. I really talked to them”, he revealed.

Political analysts are of the view that the gentleman agreement reached by the three senatorial districts to rotate the governorship slot would speak volume for the PDP candidate as the other two districts have taken their turn.