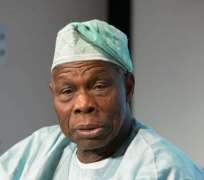 Presidential candidate of KOWA Party, Sina Fagbenro-Byron, has vowed to “set up an Independent Body of Investigators with specific powers to reopen the alleged missing $16 billion meant for electricity projects during the government of former president Olusegun Obasanjo and all reports of corruption in the electricity sector and to ensure effective prosecution of corruption allegations in the sector if voted into power.”

The KOWA party candidate said: “I am particularly interested in getting to the root of the allegations of looting of the benefits of families of the deceased employees of Power Holding Company of Nigeria; and the budgeted N16 billion between 2003 and 2007.”

Sina Fagbenro-Byron made the commitment today at the public enlightenment session on anti-corruption commitments for presidential candidates ahead of the February 16 general elections, organized by Socio-Economic Rights and Accountability Project (SERAP).

At the event which held at Radisson Hotel, Isaac John, Ikeja, Lagos, the KOWA presidential candidate said: “I also commit to a comprehensive audit of spending on security votes by presidents and governors since the return of democracy in 1999 and commit to direct the Attorney General and Minister of Justice to take legal action, in the public interest to hold governments to account on spending on security votes.”

SERAP deputy director Kolawole Oluwadare said: “We welcome the KOWA party presidential candidate’s detailed anti-corruption commitments. We call on other presidential candidates to publicly tell Nigerians what they will do regarding the illegal security votes, constitutional immunity clause, the missing $16 billion meant for electricity projects, and the opacity around asset declaration details by presidents and governors.”

“The leading presidential candidates--President Muhammadu Buhari of the All Progressives’ Party and Atiku Abubakar of the People Democratic Party--should stop taking Nigerians for granted and speak to us directly on how, exactly, they will address these fundamental governance issues.”

Sina Fagbenro-Byron accepted all SERAP’s 5-point anti-corruption commitments for presidential candidates. His statement at the event read in part: “I do not subscribe to the current manner of management of security votes and I commit to subjecting such votes to public audit and scrutiny within 3-6 months of their expenditure and in which case the president and state governors shall be held responsible as Chief accounting officers regardless of whether they have delegated such powers.”

“I commit to decentralize the power generating, transmission and distribution capacity in Nigeria and will immediately institute a Law Review Panel to repeal and replace the Electric Power Sector Reform Act of 2005. Alongside this, I commit to the immediate set up of an Independent Body of Investigators to deeply investigate systemic corruption and impunity within the system.”

“I commit to the engagement of Independent Prosecutors as well as Special Anticorruption Courts in the six-geopolitical zones of the country for the effective and speedy prosecution of all indicted for corruption at state level. I also commit that within the first 365 days in office, to begin the process of a new constitution which will make provision for the institutions stated herein.”

“I commit to amending section 308 of the 1999 Constitution on immunity to exclude acts of criminal breach of trust. I also commit to work with the judiciary to improve the independence of the National Judicial Council, including by reviewing requirements for its leadership to allow retired judges of proven integrity to lead the council. I further commit to working with and encouraging the Chief Justice of Nigeria and National Judicial Council to ensure that the Chief Justice of Nigeria and all other judges make periodic asset declarations and public disclosures of such declarations.”

“I commit to empower the Attorney General and Minister of Justice or an Independent Investigator with an irrevocable instruction to cause to be periodically investigated cases of apparent disparity between the asset declarations of elected public servants, including of the President and Governors before assuming offices and their alleged wealth after leaving to refer such cases to the Independent Corrupt Practices and Other Related Offences Commission (ICPC) the Code of Code Bureau for joint investigation and prosecution with the Economic and Financial Crimes Commission (EFCC).”

It would be recalled that SERAP had last month sent an open letter to major presidential candidates for Nigeria’s February 16 election urging them to “publicly commit to revolutionary and innovative anti-corruption reforms in five key areas, such as security votes, power sector corruption, judicial corruption and removal of immunity for presidents, vice-presidents, state governors and deputy state governors.”

SERAP then urged presidential candidates for Alliance for New Nigeria, Fela Durotoye; Young Progressives Party candidate, Kingsley Moghalu; KOWA Party, Sina Fagbenro-Byron; African Democratic Congress, Obadaiah Mailafia; African Action Congress, Omoyele Sowore and others to make specific commitments on what they would do to address corruption in the power sector and security votes, among other issues.

The open letter dated 19 January 2019 read in part: “Consistent with their right to participate in their own government, Nigerian voters deserve a substantive debate during the campaign about issues that affect them, particularly with respect to combating corruption. Now is the time to make commitment for specific reforms that will strengthen Nigeria’s anti-corruption record and standing in global ranking. Set forth below are 5 main anti-corruption priorities that candidates should address. Please let us know which positions you will support.”

“Prior to the elections, SERAP will issue a short report on the anti-corruption commitments that candidates and political parties have made. SERAP will then issue an anticorruption assessment report in March 2019, to set clear anti-corruption agenda for the next president and administration, which would assume office May 29, 2019.”