How A Greedy Man Killed A Woman Friend Because Of Money 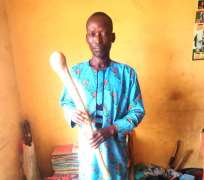 A greedy man in Ogun State, Kazeem Adebayo has killed his 30-yaer-old woman friend, Abosede Adesanya and buried her in a shallow grave after dispossessing the woman of her N500,000.

The 47-yaer-old man who resides in Ijebu-Igbo buried the woman in his house and pretended that he didn’t know the whereabouts of the woman when her relatives were looking for her.

The mother of the deceased, Mrs Amoke Onasanya told policemen at Ijebu-Igbo divisional police headquarters on the 25th Jan, 2019 that her daughters received a call from Adebayo on 24th of January 2019 that he (Adebayo) has got a plot of land for the deceased to buy for her mother, consequent upon which the deceased left home with the sum of #530,000.

She stated further that hours after Abosede left home, her cell phone was switched off and she has not been reached since then. Upon the report, Adebayo was invited by the police at Ijebu-Igbo division, but he denied knowing the whereabouts of the deceased.

The Police Public Relations Officer for Ogun State Police Command, Abimbola Oyeyemi said the Commissioner of Police in the state, CP Ahmed Iliyasu order the Deputy Commissioner of police in charge of State Criminals Investigation and Intelligence Department DCP Wale Abbas to take over the investigation with the view of discovering the mystery behind the sudden disappearance of the victim who was a mother of five.

Oyeyemi said the investigation embarked upon by the detectives from SCIID led to the discovery of a shallow grave right inside Adebayo’s house. According to the PPRO, when the grave was dug, the decomposing body of the victim was discovered.

The PPRO said “It was at this point that the suspect confessed killing the deceased and took possession of the #530,000 on her. He confessed further that he hit her on the head which led to the deceased death and subsequently buried her in his house, in order to cover any trace of the woman’s death to him.”

The police spokesperson said Adebayo confessed that he has used #30,000 out of the money he took from the deceased to settle an outstanding debt while the remaining #500,000 is been kept with one his friends. He said the corpse of the deceased has been deposited at General Hospital morgue for post mortem.

Commissioner of Police, CP Ahmed Iliyasu has directed the SCIID to expedite action into the investigation in order to arraign the suspect as soon as possible.