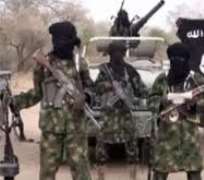 The Theatre Commander Operation LAFIYA DOLE Major General Benson Akinroluyo has uncovered the deployment of deception by Boko Haram terrorists to win the confidence and support of locals in the North East.

General Akinroluyo raised the alarm while addressing troops of Sector 2 Operation LAFIYA DOLE during a three-day operational tour of the sector's area of responsibility that lasted from Thursday 31 January to Saturday 2 February 2019.

Colonel Onyema Nwachukwu, the Deputy Director Public Relations, Theatre Command Operation LAFIYA DOLE in a statement Sunday said the Theatre Commander disclosed further, that Boko Haram terrorists now engage in cattle rustling and later return the rustled cattle to their owners, thereby deceitfully creating the impression of " the Good Samaritan" and presenting themselves as a "protector of the people".

He described the gimmick as a dangerous ploy that must be nipped in the bud, before it spirals out of control.

The Commander urged the troops to prevent any form of cattle rustling by the insurgents, as it is now being used as a means of psychological warfare to make the locals see them in positive light and be receptive to their ideology.

General Akinroluyo also called on all community and opinion leaders to educate members of their communities on the development, adding, that they must be vigilant and not fall for the wiles of the terrorists.

He therefore urged the people of the North East, particularly the youth, not to be persuaded to join the terrorists group describing it as the enemy of the people.

The Theatre Commander accompanied by the Commander Sector 2, Brigadier General Mohammed Dala also visited the troops in Nigerian Army Special Forces School and 27 Task Force Brigade both in Buni Yadi, as well as 159 and 233 Battalions in Geidam and Damaturu respectively, where he assured the troops that their operational challenges and welfare are getting adequate attention.

He also paid a visit to in-patient troops undergoing medical treatment at the Sector 2 Field Ambulance.

Speaking further during his address to the troops, General Akinroluyo charged them to remain professional and alive to their responsibilities in the onslought against the insurgents, urging them to be resilient until the attainment of a decisive defeat.