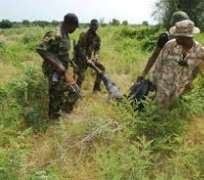 It was reported on Wednesday night around 6. 25 pm that gunmen suspected to be members of the boko Haram group ambsuhed the new Brigade Commander between Gabino Town and Dikwa town about 45 Kilometres away from Dikwa town opening fire on his convoy in the middle of the road.

Luckily, the said new brigade commander narrowly escaped death during the ambush but about 8 soldiers were said to have paid the supreme price at the scene of the attack while 5 others were said to have sustained various degree of injuries and were responding to treatment at the military medical services Center, Maiduguri.

However, military sources said that, "There was an ambush on Wednesday around 6:15pm involving the troops and the new brigade Commander on their way from gajibo to dikwa."

"Yes there was an ambush against the new brigade commander on his way from Gajibo." "The officer came in on 9th december (reported for duty from his old post). He's one of our colleague friend in NDA.

However, the military are yet to respond to the media request on the matter.

Meanwhile in another development in Yobe State, Information recieved this morning, 01 Feb, 2019 indicate that NSAG intercepted a number of passenger vehicles coming from Maiduguri to Southern Borno through Damaturu/Buni Yadi/Biu road. Unspecified number of passengers are reported to have been abducted.