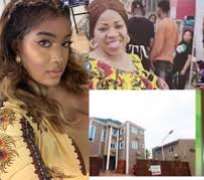 Police in Lagos opened an investigation into a suspicious death last week after receiving a call for an assault to a 56-year-old woman.

Upon arrival, the call was upgraded to murder by strangulation,” the Police said.

Mrs. Abimbola Olusola, 56, owner of the Etashol Hotel and Suites, located on Budland Street in the Ojodu Berger area of Lagos State and her manager Tunji Omikunle, were murdered by workers in the hotel.

The deceased were drugged, tied up and strangled by a gang led by workers at the hotel, according to Punch Metro.

Olusola, who had lived in London, the United Kingdom, for 35 years, was said to have returned to Nigeria recently and opened the hotel for business in March 2018.

Mrs. Olusola, according to the report had issues with some of the workers, who allegedly defrauded the hotel of millions of naira. Mr Omikunle
Two of the workers were reportedly sacked after the police were invited to look into the matter.

The suspects also allegedly deactivated the Closed Circuit Television cameras on the premises, dragged the manager into a toilet, where his hands and feet were tied.

Punch Metro reported that both the manager and Mrs. Olusola were both strangled to death afterwards.

Relatives of the deceased disclosed that the suspects fled the hotel, as family members met the lifeless bodies of the victims in the hotel.

Speaking under the condition of anonymity, a family member of the late businesswoman, said Olusola was planning to lease out the hotel and return to London when tragedy struck.

“From what I learnt, the manager had dragged one of them, called Light, to a police station for involvement in fraud in the hotel. There were also cases of stealing involving these guys. Two of them were sacked.

“On Thursday night, the men tied Tunji’s hands and feet and strangled him. I think it was after they had killed Tunji that they got access to the card that opens my sister’s room. They went to her bed, tied her up and strangled her.”

According to report, the deceased 12-year-old son, who was to go to school on Friday morning, was the first to discover the mother’s corpse.

Around 7am when the school bus came to pick him, a vigilante member, who had tried unsuccessfully to reach the deceased businesswoman on the telephone, insisted on knowing her whereabouts from the son.

The boy was said to have found her dead on the bed in her room.

The family member added, “The child sleeps in a room in the hotel. Tunji used to wake him up and prepare him for school. But when the boy did not see the manager that morning and his school bus had arrived, he quickly got himself ready and ran out.

“However, a vigilante member, who had suspected that something was amiss after noticing some of the workers’ movements the previous night, waited at the hotel’s gate. The man had called both Tunji and the woman on their phones without getting any response.

“He went to her room and raised the alarm after discovering her corpse.”

Per Second News gathered that the woman is the mother of UK-based Nigerian singer, Melissa Whiskey. Melissa Whiskey and her late mother
There was no stab wound or anything on the corpses. The victims were strangled. We recovered the ropes used to commit the crime,” the source said.

The case had been transferred to the State Criminal Investigation and Intelligence Department, Yaba, where one of the workers was being interrogated.