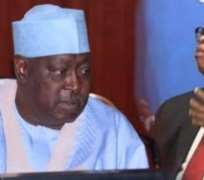 The Federal Government has finally filed charges against the immediate-past Secretary to the Government of the Federation (SGF), Babachir Lawal.

The former SGF was slammed with 10 charges bordering on allegations of fraud in the filing which is coming almost 14 months after he was sacked by the government.

It also filed four charges of alleged fraud against a former Director-General of the National Intelligence Agency, Ayodele Oke, and his wife, Mrs Folashade Oke.

President Muhammadu Buhari had in October 2017 sacked Lawal following a report of investigations by a panel headed by Vice President Yemi Osinbajo, into allegations of fraud leveled against him, but Nigerians had remained concerned that he had faced no prosecution while the Presidency is hounding members of the opposition for various corruption charges..

The Economic and Financial Crimes Commission (EFCC) in 10-count charge filed by Offem Uket on January 30 alleged that Lawal conspired with a director and staff in Rholavision Engineering Ltd, Hamidu David Lawal, and Suleiman Abubakar, to fraudulently acquire a property and thereby committed an offence contrary to Section 26(1)(c) of the Corrupt Practices and Other Related Offences Act, 2000 and punishable under Section 12 of the same Act.

Others charged with them before the High Court of the Federal Capital Territory are Apeh John Monday and his company Josmoh Technologies Ltd, as well as  Rholavision Engineering Ltd, a company were Lawal was said to be a director. They are expected to be arraigned next week before the court.

One of the charges accused Hamidu, Abubakar and Rholavision to have “abet the award of contract to Rholavision Engineering Ltd for the removal of invasive plant species and simplified irrigation to the tune of N6.4million by the office of the Secretary to the Government of the Federation (OSGF) through the Presidential Initiative for North East (PINE).”

Count 9 of the charge accused Hamidu to have “abet the holding indirectly of a private interest by Engineer Babachir Lawal in the award of contract to Josmon Technologies Ltd for the removal of invasive plant species and simplified irrigation by the office of the Secretary to the Government of the Federation (OSGF) through the Presidential Initiative for North East (PINE) to the tune of N272.5million.”

Lawal was also accused to have fraudulently acquired a private interest in the contract awarded to Josmon Technologies Ltd.

The acting spokesperson of the EFCC, Orilade Tony, confirmed the development.

Mr Lawal was removed from office after he was indicted by a Senate committee which investigated the management of money meant to assist persons displaced by Boko Haram.

Since his removal in 2017 by President Muhammadu Buhari, many Nigerians have called for his prosecution.

Mr Lawal has since his exit been a major campaigner for President Buhari's re-election in his home Adamawa State.

Analysts believe that the charging is coming as a result pressure from Nigerians who made singsong of Lawal case as an example of selective justice by Buhari administration.