Unfolding events in Nigeria have justified my position on Buhari: Obasanjo 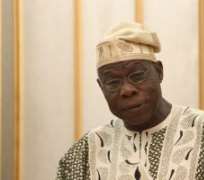 Former President of Nigeria, Olusegun Obasanjo has said that events unfolding in the nation have confirmed his essay and comments on the administration of President Muhammadu Buhari.

Obasanjo stated this on Wednesday in Lagos while delivering a lecture at the Lagos Island Club titled “My Vision To Get Nigeria Working Again.”

“What I have said and written about Buhari are clearly true and they are not controverted. If anything, they have been confirmed and proven beyond any shadow of a doubt.

“Only two Sundays ago, I said what I believe are understood as to the way the Buhari administration is going about the coming elections.

“Within less than a week, things started to show themselves. Nigerians are rising up to defend our fledgling democracy and to defend our future progress,” he stated.

Obasanjo's comments come two weeks after he accused President Buhari of returning the country to the era when state institutions were used to fight perceived enemies of the government.

“Today, another Abacha Era is here.  The security institutions are being misused to fight all critics and opponents of Buhari and to derail our fledgling democracy,” he claimed.

“EFCC, Police and Code of Conduct Tribunal are also being equally misused to deal with those Buhari sees as enemies for criticising him or as those who may not do his bidding in manipulating election results.”

Speaking on his decision to forgive his former Vice President and Peoples Democratic Party (PDP) presidential candidate of any wrong meted to him while in office, Obasanjo stated that people who faulted the move should question God.

According to the former President, his reconciliation with Atiku stemmed from the biblical injunction that requires us to forgive those who wrong us.

He also reiterated confidence in the PDP presidential candidate to get Nigeria working again.