Shettima Apologizes For His Mistakes While In Office. As He Doles Out N5 M To Apc Solidarity Group 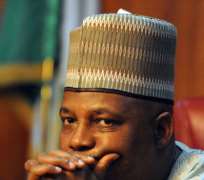 Governor Kashim Shettima of Borno State yesterday admitted that during his first and second tenure which will soon come to an end he may have in one way or the other offended some electorates, however noted that as a human, he is bound to make mistake(s), and appealed to those who did not benefit from his government for their understanding..

" As a leader, I cannot pretend to be hundred percent perfect especially in the course of discharging my duties as Governor of Borno State in the past seven years,

" I might have offended one person or the other amongst you in terms of denying you appointment as Commissioner, Special Adviser or any other political position, but one important thing is that all of us cannot be in positions.

"Therefore, I want to appeal to all those who felt aggrieved to please forgive and forget the past, let us team up together for the good of our great ruling party.

" With Professor Zulum as our incoming governor by God's Grace (Insha Allah), our ship is not a sinking one, therefore, i am calling on the good people of Borno State to put sentiments aside and vote wisely.

Addressing the Makinta Solidarity Group (MSG) at the Government House led by the guber aspirant to show their support to Professor Zulum and all other candidates on the platform of the ruling APC in the 2019 general elections, Shettima said, "it is God that gives power to whom He wishes", adding that unity among the entire members of the party irrespective of what happened is very paramount for the success/victory at the polls.

The governor added that although, there were many Organizations, Groups, or Associations who have shown their full support to President Muhammadu Buhari #4+4# Next Level in the state, he is more convinced and dependent on Makinta Solidarity Group than any other political group in the state, stressing that some of the groups claim to be in support of President Buhari and the APC led -Government are fake.

His words: " I want to thank Hon. Makinta and his teaming supporters who have come here to give their Solidarity and pledge working together as a team to deliver all our candidates to come out victorious at the forthcoming polls.

"There are many political groups who have come out and pledged to work for the victory of our great party in the state, but most of these groups are fake, as I am more convinced and confident on the Makinta Solidarity Group (MSG).

He however doled out N5 million for onward distribution to supporters of Hon. Mohammed Makinta, one of the gubernatorial aspirants who lost out in the All Progressive Congress (APC) indirect primaries that saw Professor Babagana Umara Zulum as 2019 APC Gubernatorial Candidate.

He added that time is ripe for all supporters of the APC to come together, unite as one big family to vote for all the candidates of the ruling party in the forthcoming general elections.

"Professor Zulum as you all know was our former Commissioner for Reconstruction, Rehabilitation and Resettlement (RRR). This is the pesron who have handled billions of naira during the reconstruction of our destroyed communities, but does not have a house of his own.

" Presently, one his wife resides at University of Maiduguri Staff quarters, while i had to order for the breakdown of one of the houses allocated to one big man at the 777 housing estate to accommodate the other wife of the Professor." Shettima said.

Shettima therefore stressed that with Professor Zulum as Governor, Borno people would be in a better and trusted hands God willing.