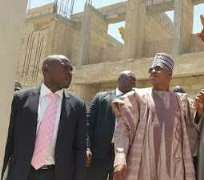 Governor Kashim Shettima of Borno State has directed contractors and consutling engineers handling Mega capital projects within the state capital to fast tractk their works and ensure the completion of the projects on time as scheduled for commissioning latest by March 2019.

Gov Shettima gave the directives when he went on inspection tour of some mega capital projects within the state capital Maiduguri.

Among the mega capital projects sites he visited include 303 Housing Estates Mega school, Ultra Modern Industrial hub, which is the largest in the North East and probably in the northern part of Nigeria.

Other include, Agricultural light house for Intergrated farming systems that will involve everybody when fully functional, Hostel facilities in one of the Orphanage Mega school near Barwee Luxury Suites, Gmoari.

Gov Shettima also rounded up his inspection tour at the Old Bewac Mega school in Zajeri area of Maiduguri along Baga road.