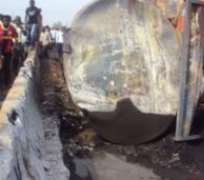 The truck was said to have spilled its content on the ground and triggered wildfire, The Guardian reports.

According to the report,
a yet-to-be-ascertained number of persons  died in the unfortunate incident while scores of vehicles got burnt.

The incident which caused heavy pandemonium in the area occurred at a bad spot in front of Onireke Police Station, Barracks bus stop.