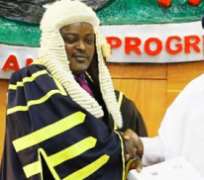 The House also summoned Ambode to appear before it within one week over his failure to formally present the 2019 Budget before the Assembly.

The News Agency of Nigeria (NAN) reports that there has been disagreement between the two arms of Lagos State Government over the 2019 budget presentation.

NAN recalled that Ambode had sent the 2019 budget to the House in December and the House insisted that the governor must lay the budget properly before it before the House could commence work on it.

During the House plenary on Monday, the lawmakers took turns to condemn the governor, alleging that the executive had commenced spending the 2019 Budget without approval of the Assembly.

The Speaker of the House, Mr Mudashiru Obasa, however, urged the lawmakers to give the governor a fair hearing over the issue involving the executive and the 2019 Appropriation Bill.

Obasa noted that there had been violation of the constitution and infractions on the part of the governor over the 2019 budget.

“The Attorney General, Finance Commissioner and Commissioner for Budget and Economic Planning, that ought to have advised the governor did not do so.

“The most important thing is that we should let the people know that a budget that was yet to be approved is being spent.

“We must give the executive a fair hearing to come and explain what happened.

“The point has been made that there must be something before the House before you can commence expenditure.

“We want to call on the Governor to come within a week to explain himself along with the relevant commissioners.

“We can't start gathering signatures for impeachment. We need to exercise patience and wait till another time,” the Speaker said.

Speaking, Mr Gbolahan Yishawu, Chairman House Committee on Budget and Economic Planning, said that there were some specific expenditures in the budget that ought to have been approved by the House which funds were being expended in 2018 budget.

“We had issues of virement and monies being spent without approval. We had cases of items that were not budgeted for being carried out, it shows the executive rewrite the budget at will.

“The Constitution states that the State House of Assembly must approve all expenditures.

“We should begin an impeachment process if the executive does not retrace its steps,” Yishawu said.

Almost all the lawmakers present took turns to criticise Ambode for alleged flagrant disobedient to the constitution and financial misconduct, stressing that they were impeachable offences.

The lawmakers said that the next thing for the governor was to resign or the House begin impeachment process against him.

The House adjourned plenary till Feb. 4.