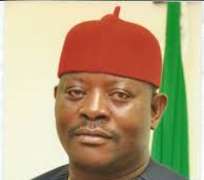 The group in the petition dated January 18, 2019 alleged that the Senator sometime in 1989 and 1990 procured a mercenaries whose photographs were apparent on the certificates of the West African Examination Council to sit and obtain results of the examinations on his behalf.

A copy of the petition signed by Mr Osita Julius Nworu and 26 others, which obtained further alleged that in an attempt to cover the crime, Ogba procured the services of one Mr. Stephen Ali, a then staff of WAEC to swap the passport photographs of the mercenaries with his passport.

The petition explained that Ogba in 1997 while contesting for the chairman of Ishielu local government area tendered the above result but the defunct Democractic Party of Nigeria (DPN) upon discovering the crime wrote to WAEC and it was confirmed that Ogba was impersonated during the examination.

The petition reads: "Obinna Joseph Of a sometime in 1989 and 1990 for a fee, procured another persons whose photographs are apparent on the certificate of the West African Examination Council with examination numbers; 04758275 O'Level 1989 and 04767134 O'Level 1990 to sit for and obtain result of the said Examination on his behalf".

"That Mr. Joseph Obinna Ogba in an attempt to cover these crimes, for a fee, procured the services of one Mr. Stephen Ali, a then staff of the West African Examination Council to criminally swap the passport photographs of the said certificates and at the records of the council with his actual passport but unfortunately to him, the commission discovered the attempt and summarily dismissed Mr. Stephen Ali on May 21, 1997".

The group therefore called on the Nigeria Police Force to act expeditiously on the petition and arrest and prosecute the accused Senator.