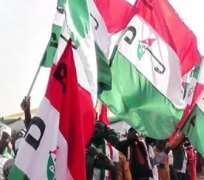 The Coalition of United Political Parties (CUPP) has described the suspension of the Chief Justice of Nigeria, Walter Onnoghen, by President Muhammadu Buhari and appointment of Justice Tanko Mohammed as illegal and a coup against judiciary.

Similarly, the Peoples Democratic Party in utter dismay described the action of the president as an invitation to anarchy.

The Spokeperson of CUPP, Ikenga Ugochinyere,  said the coalition had been vindicated on their earlier alarm that Buhari wanted to appoint pro All Peoples Congress CJN to help use the judiciary to affirm APC candidates in the 2019 pre and post election litigations.

He spoke to journalists  in Abuja after the Buhari action.

He said,  “The opposition parties raised alarm last week on the plot by the Buhari APC administration to remove Chief Justice Onnoghen and replace him with Justice Tanko Mohammed and they vehemently denied it.”

“The CJN can be removed from office either if he has been convicted or if under section 291 and 292 of the constitution, the Senate affirms a request by the President to remove him by two-third majority vote. Buhari has dared  Nigerians. The filed a charge at CCT with a hurriedly put petition, we kept quiet;  they  filed a motion to remove him from the tribunal but the Appeal Court restrained them and just few hours to the inauguration of the supreme court election panel that will hear pre and post 2019 election, the emperor crushed the constitution and overthrew the leadership of the Supreme Court and appointed his stooge.”

He lamented that President Buhari had finally overthrown constitutional governance adding that Onnoghen's illegal removal was aimed at stopping the swearing in of members of the 2019 general election petition tribunal.

Ugochinyere further said that President Buhari had shown with this development that he was the most cruel and barbaric President Nigeria ever had.

“A man who rode to power on the basis of respect for the rule law and fundamental principles of democracy has chosen to play to the gallery of dictatorship. Let see how it goes.”

“Onnoghen remains CJN and we will not recognise this unlawful, unconstitutional

act. We call on lawyers, Judges and Judicial Staffs to down tool now, shut down of courts and massive protest to save our judicial system should start now.”

The Coalition urged the Senate to reconvene and start removal process of Justice Tanko Mohammad.

“The democratic institutions will fight back. Trust me it is the beginning of democracy in Nigeria. Out of adversity comes strength. This is the last battle,” Ugochinyere said

PDP said that Buhari's action in attempting to unilaterally appoint a Chief Justice and foist him on the country was a direct invitation to anarchy, national confusion and a monumental crisis capable of derailing the country's democracy and destroying its corporate existence as a nation.

But the PDP, the main opposition party,  therefore called on the National Assembly to reconvene and take legislative action against the President.

The PDP in a statement Friday by its National Publicity Secretary, Mr. Kola Ologbondiyan, said the party firmly holds that such impunity cannot stand, as Nigeria is a nation governed by law and not by the whims and caprices of a dictatorial leader.

It said Buhari wanted to ruin the country and vowed never allow him.

The party stated, “It is now clear to the world that President Buhari, in his selfish self-succession bid, is out to cause mayhem in our nation and truncate the smooth conduct of the 2019 election, not minding the consequential human and material losses.

“There can be no two Chief Justices of Nigeria. Our constitution is clear on how a Chief Justice is appointed and removed as such does not lie on the prerogative of the President. As such, we urge all Nigerians and the international community to recognise only Justice Walter Onnoghen as the Chief Justice of Nigeria.”

PDP stressed further that the world already knows how the Buhari administration had been trying to compromise the electoral process, including the refusal to sign the amendment to the Electoral Act, as well as appointment of his relation by marriage, Mrs. Amina Zakari, to coordinate the collation of presidential election results.

It said, “Nigerians must reject the incendiary move by President Buhari to forcefully suspend our constitution, annex the judicial arm of government and open the nation up for full-blown totalitarianism to achieve his self-succession bid, having realised that he cannot win in the 2019 general election.

“The PDP wants President Buhari to know that this nation belongs to all Nigerians. Our nation is a democratic state governed by the constitution and the law and Nigerians will never allow anybody to appropriate rulership to himself outside the dictates of the law.”

“President Buhari tried to forcefully remove the leadership of the National Assembly and failed. His attempt to annex the judiciary and impose a Chief Justice that will surrender the judiciary to him, is also already dead on arrival.”

The PDP called on the international community and particularly the United States and the United Kingdom to note that this assault on the judiciary was geared towards subverting the 2019 general elections and as such immediately list Buhari and APC leaders for proposed sanctions on election riggers and perpetrators of violence in the general election.

It also called on the National Assembly to immediately reconvene and proceed with legislative actions against President Buhari for this gross misconduct.