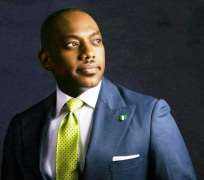 Contrary to the news circulating round that the presidential candidate of the Alliance for New Nigeria (ANN), Fela Durotoye had withdrawn from the 2019 presidential election race after Dr Oby Ezekesili's exit, the candidate has debunked and urged the public to disregard the rumour.

According to a release signed by the Director General of ANN 2019 Presidential Campaign, Lanre Oyegbola, to debunk the claim that Durotoye had stepped down earlier today, stated that the news was not true. Instead, he was ready to come into any coalition with other presidential candidates, specially, Omoyele Sowore and Professor Kingsley Moghalu.

The release stated: "To ensure that an alliance is formed and we present a united front, I am ready to come into any coalition talks with my brothers, Omoyele Sowore and Professor Kingsley Moghalu and to submit myself to any transparent that will help us arrive at a selection of a consensus candidate from amongst us.

"To be clear, if the process produces any candidate apart from myself, I am ready to support whoever the consensus candidate is and to do all I can to support the coalition to win the 2019 presidential election for our generation.

He further charged other frontline candidates to join forces together to seize the 'historic window of opportunity for our generation to select one of us to go ahead of us...so that all of us can come together and speak with one voice at the 2019 general election.'

He, however, commended Dr Oby Ezekwesili who had stirred the coalition movement following her withdrawal from the presidential race.

"I have always believed that leadership is service and sacrifice and today, I would like to commend Dr (Mrs) Obey Ezekwesili for leading the charge to forming a viable coalition to presenting a consensus candidate for the 2019 presidential election," he added.