TraderMoni: Election Observer Claims It Is A Form Of Voter Inducement 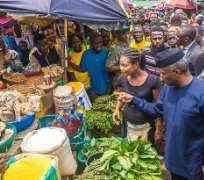 Transparency International Nigeria (TIN), has said that that the Federal Government TraderMoni scheme is a form of voter inducement.

Chairman of the observer group, Awwal Rafsanjani, made the assertion while appearing as a guest on Channels Television's Lunch Time Politics.

Mr Rafsanjani claimed that the initiative is an “Official use of public funds in the name of TraderMoni to actually induce voters”.

He said that his claim is based on the fact that the TraderMoni scheme is not a programme that was “part and parcel of the manifesto of the ruling party”.

The TIN Chairman said the scheme which is not a part of the constitution would have been looked at differently if had started three years ago, noting that running the exercise so close to the elections, raises all the wrong flags.

“The allegation by many Nigerians that this is clearly a case of vote buying using public funds to do that, and it goes contrary to our constitution and to having a free and fair election,” Mr Rafsanjani stated.

He said the TraderMoni scheme goes contrary to President Muhammadu Buhari's statement in which the President said no public fund will be used for his re-election.

The Federal Government has argued that the TraderMoni is an empowerment initiative designed to meet the financing need of at least 2 million petty traders across the country.

Disagreeing, however, Mr Rafsanjani said if the government had TraderMoni as a policy plan, they should have begun its implementation before the elections.

He said no matter what the intention is, running TraderMoni few weeks to the election will give different signals to Nigerians across the federation, adding that if the government was sincere about the scheme, they would have started before the elections drew this close.

Mr Rafsanjani said mixing election campaign with “this distribution of money” is not a good move, adding that the government was ill-advised on the TraderMoni initiative.

He said even the opposition will capitalise on the scheme as an excuse for protest, adding that clearly for him, “TraderMoni is vote buying”.