By Olawale Adewale, The Nigerian Voice,Osogbo 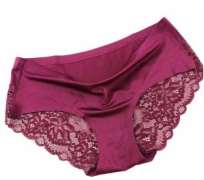 A mild drama ensued in Osogbo when a man, Opeyemi Adeleke who visited a popular brothel known as Angle 90 stole panty of a sex worker, Miss Gift Sunday after their sexual intercourse.

The 23-year-old man, Adeleke Opeyemi stole the panty when the sex worker went to bathroom to clean up but he was not lucky because the sex workers still wanted to wear the same panty again when she came back from the bathroom.

While looking for the panty which she removed when the two of them wanted to have sex, the sex worker became confused and confronted Opeyemi since no one has entered the room except the two of them.

The man told her that he does not know the whereabouts of the panty and the sex worker became agitated and raised alarm.

Within a twinkle of an eye, other sex workers in the brothel and the passersby gathered and they decided to search the man.

According to eyewitnesses, the panty was found on the man and the matter was reported to police at Dugbe Divisional Police Headquarters.

After interrogation, the police took the man to a magistrate court and arraigned him for stealing sex worker's panty.

The Police Prosecutor, Inspector Jafani Muslim told the court that the man committed an offense contrary to and punishable under section 249 (D) of Criminal Code, CAP 34, Volume II, Law of Osun State Nigeria, 2003.

The accused person pleaded not guilty to the offense and his lawyer, Mrs Susan Adeagbo prayed to the court to grant her client a bail but the Magistrate, Mrs Modupe Awodele lamented that the manner people are stealing women's panties nowadays has become worrisome. She remanded the man in prison till February 12.