By Buhari For Better Tomorrow Movement 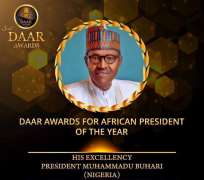 A group known as Buhari for Better Tomorrow Movement has congratulated President Muhammadu Buhari on his emergence as Daar communication African president of the year 2018.

In a statement released to newsmen in Abuja, the national publicity Secretary of the group, Mr. Ibrahim Abubakar said President Buhari has done great works to deserve the award in all sense of fairness and fairplay.

The group who described President Buhari as a great leader with a great difference asked him to ignore the latest accusation made against him and the INEC by former President Olusegun Obasanjo saying that paying attention to such imaginative accusation is like Obasanjo paying attention to allegation made against him by Iyabo Obasanjo-Bello four years ago.

The group however denied Obasanjo's allegation accusing the INEC, President Buhari and the APC of planning to rig the coming general election, saying their Dubai and United States plots and strategies against Buhari's re-election would fail like Jonathan failed in 2015.