Eight soldiers killed in attack on Army base 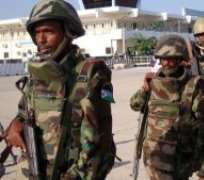 At least eight Somali soldiers were killed when the Al-Shabaab jihadist group overran their military camp on the outskirts of the town of Kismayo early Saturday, military officials and local elders said.

According to the sources, heavily-armed Shabaab militants launched a dawn raid on the military camp, followed by a heavy exchange of gunfire which lasted hours.

“The terrorists attacked Bulogagdud military base using heavy weaponry and explosives. The Somali military and Jubaland forces resisted the enemy before later retreating back from the base,” Mohamed Abdikarin, a Somali military official told AFP by phone,

“Six soldiers were killed during the attack and two others died after a booby-trapped vehicle was detonated when the forces retook control of the base,” he added.

Sources at nearby villages said the militants looted the camp and took a military vehicle.

“Al-Shabaab fighters secured control of the base and looted everything. They have set fire to the arms depots and took a military vehicle, but there were two choppers which carried out air strikes during the attack,” traditional elder Hassan Rashid told AFP.

The US military has stepped up airstrikes against Shabaab since 2017.

Suleyman Isse, another witness at a nearby village, said the Somali forces later regrouped after receiving reinforcement from Kismayo and returned to the base.

“The Somali forces retook control of the base with the assistance of military helicopters belonging to the US special forces which were hovering over the area even after the attack,” he said.

Shabaab militants claimed responsibility for the attack and claimed to have killed 42 soldiers.

The incident came a day after Shabaab said it had attacked Ethiopian troops in Somalia in an ambush attack on the road between the capital and the southwest town of Baidoa.

The Shabaab have been fighting to overthrow the internationally-backed government in Mogadishu and on Tuesday carried out a deadly attack in neighbouring Kenya, which it has regularly targeted since Nairobi sent troops into Somalia.

Four gunmen and a suicide bomber left 21 dead and injured 28 in Nairobi. (AFP