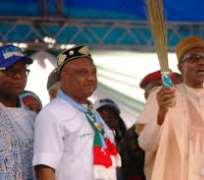 President Muhammadu Buhari caused a stir on social media on Thursday when he erroneously referred to the governorship candidate of his party as the 'presidential candidate'.

This happened during the All Progressives Congress (APC) presidential campaign rally in Delta State.

President Buhari was to hand over the APC's flag to Great Ogboru, the APC governorship candidate in the state when he made a slip.

In addressing Mr Ogboru, the president said, “I am handing over this flag of honour to our presidential candidate.”

It took two more attempts before the President got it right.

President Buhari was also in Edo State on Thursday, where he put his vocals to the test by leading party leaders in a rendition of the National Anthem.