Breaking: Scores Injured As Tipper Fall Off Flyover In Delta 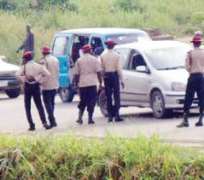 News reaching The Nigerian Voice, Asaba has it that a tipper popularly known as 911 has fallen off the Interbua flyover connecting Illah to Summit road in Asaba, the Delta State capital.

The incident which occurred Thursday evening about 8: 00 pm was a lone tipper coming from Anwai when the accident happened.

An eyewitness told our correspondent that the tipper was on high speed with four occupants including the driver, “the driver broke his waist while others were seriously wounded”.’

The eyewitness said sympathizers rushed to the scene of the accident “one of the occupant was dragged out of the 911, he could not come out”, before they were rushed to the Federal Medical Centre (FMC), with a Hilux van.