Why former SGF babachir Lawal has not been arrested, charged to court: Buhari 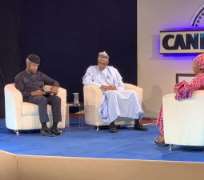 President Muhammadu Buhari on Wednesday night appealed to Nigerians that have evidence against corrupt persons in government to make it available.

He made the appeal while answering questions during a live TV programme tagged 'The Candidates', anchored by Kadaria Ahmed.

The Programme is sponsored by MacArthur Foundation and NTA.

Buhari was reacting to the allegations that his government's anti corruption war shielded members of the ruling All Progressives Congress (APC).

The President was asked why the former Secretary to the Government of the Federation, SGF, Babachir David Lawal, and other persons in his government have not been persecuted inspite of the fight against corruption.

Buhari said that the onus was on the person making allegations to provide evidence why the accused should be prosecuted.

“That is not fair criticism of the government. I don't think there is anybody that is being pointed out as corrupt in the last dispensation which we looked the other direction.

“I told you why I have to be careful and the public should help us, if there are strong allegations that is backed up with evidences, bank accounts, names of companies floated, contracts awarded, then we take them before the courts through EFCC and ICPC and we have to trust the system and allow them to complete investigation.

“If we just take people in as we did during the military and lock them up, the present democracy, a multi party democracy does not approve that.

“If you accuse any person, you have to provide evidence in court for him to be prosecuted, So, if there is strong allegations, the government may decide to ask people to go like the former Secretary to the Government of the Federation we asked him to go.

“The matter is already before the EFCC and I believe that a directive has been issued to charge him and all persons who have cases before the EFCC.” he stated.

President Buhari also said he is yet to receive the Disability Bill from the National Assembly.

He said that his administration has done a lot in addressing insecurity , especially the Boko Haram in the North East.

“When this administration came in, Boko Haram was holding on to 17 local governments in the North east. At this moment they are not holding any. They have only resorted to attacking soft targets.

“The best you can get about this administration in terms of fighting Boko Haram is that people are being returned to their various homes, which was not the case before.

He advised the media to do their thorough research on issues related to insecurity.''

Buhari said that he was concerned when security personnel were being shortchanged.

He said his government is concerned about the welfare of security personnel especially those rendered disabled in the course of defending the country.

*With transcripts of the interview by The Nation
Credit: NAN