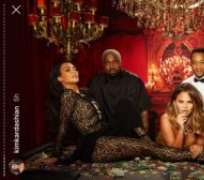 It’s probably safe to assume that your Saturday plans were not as elaborate as Kim Kardashian and Kanye West’s date night this weekend.

Always one to stick to a theme, Kim wore a skintight sheer lace bodysuit by Alexander Wang with a trio of keyholes at the neckline, which were secured by crystal clasps. She paired the sultry number with strappy sandals and tied a black sweater around her waist.

In photos shared to social media, the Keeping Up with the Kardashians star was in her element posing across a craps table with dollar bills and chips covering its surface. Also in the snapshots were Chrissy, who opted for a slinky gold gown and bombshell waves.

Another member of the KarJenner clan, Kourtney Kardashian, was also in attendance. She posted a picture of herself wearing a sexy version of a menswear-inspired suit while puffing on a cigar.

By the looks of it, the party appeared to be a roaring success. Happy birthday, John!