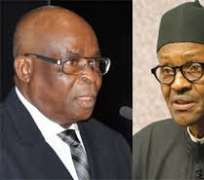 The Peoples Democratic Party’s Presidential Candidate, Atiku Abubakar, has warned President Muhammadu Buhari and the ruling All Progressives Congress to avoid throwing Nigeria into an avoidable crisis over their desperation to sack the Chief Justice of Nigeria, Justice Walter Onnoghen.

Atiku in a statement issued in Abuja on Saturday through his Special Assistant on Public Communication, Phrank Shaibu, said the principle of separation of powers remains sacrosanct in a democracy irrespective of what President Buhari is being told by his advisers or the buttons they are pressing to forcefully remove the CJN.

Atiku noted that the plot to sack Justice Onnoghen was a preemptive move against the bench in the face of imminent defeat and knowing the role that the judiciary plays in the final outcome of elections.

He said, “We have just been made aware of the plot by President Muhammadu Buhari the All Progressives Congress (APC) to sack Justice Walter Samuel Nkanu Onnoghen using flimsy assets declaration issues as a pretext.

“We are aware that there are plans to arraign Justice Onnoghen before the Justice Danladi Yakubu Umar led-Code of Conduct Tribunal on Monday, January 14, 2019.

“The charge against Onnoghen, we understand has already been filed and served on him last Friday at his official residence in Abuja preparatory to his appearance at the Tribunal.

”But we warn that despite the clandestine meetings in the highest echelon of the APC and also involving some top officials of the federal government which include the Code of Conduct Tribunal, neither Buhari nor the APC can re-write the Nigerian Constitution just because of its impending defeat at the February 16, presidential election.

“Heavens did not fall when PDP lost to the APC in 2015. And heavens will not fall now that the APC is sure to lose to the PDP, seeing that the APC’s plan to rig in the forthcoming elections will not pull through.”

Atiku said that their plan is to enable acting Chief Justice of Nigeria to sit on his election petition because he has seen the signal that he will lose the February 16 presidential election.