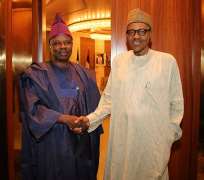 President Muhammadu Buhari asks voters to reject anti-party, disloyal candidates in the forthcoming elections, and halt the spread of divisions in the ruling party.

In what appeared to be a message directed at Ogun state governor, Senator Ibikunle Amosun and his Imo state counterpart, Rochas Okorocha over their anti-party activities and disloyalty to party supremacy, President Muhammadu Buhari has lambasted the actions of some APC governors who single-handedly choose who to contest all elective positions in their states without carrying along all stakeholders. The President revealed that those splinter parties that endorsed him are after their selfish interests and has directed the people of the state to vote against them. The President has also declared his support for all APC candidates in a release made public by his media aide, Mallam Garba Shehu.

President Buhari made this known in a television interview aired on Arise TV. The interview was aired for over one hour and the President made his opinion known over some splinter parties from the APC who have come to adopt him. He described their adoption as one based selfish reasons. He described the party leadership as impartial and fair during the process of the primaries while he lambasted the governors who tried to single-handedly choose all candidates for all elective positions in their states without due process and also against the direct primary option the party provided for.

Adekunle Akinlade, who is the preferred governorship candidate of Governor Ibikunle Amosun in Ogun State, recently dumped the ruling All Progressives Congress (APC) for the Allied People’s Movement (APM).