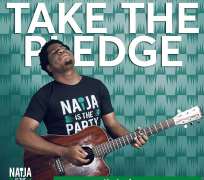 The Nigeria’s Next Generation Artistes under the auspices of “The alternative music scene in Nigeria” says it will mobilise young Nigerian voters to ensure they actively participate in the forthcoming general election.

In a statement issued in Abuja on Friday, the group said it hope to achieve its target in collaboration with Ford Foundation and TheElectionNetwork (TEN), in the mobilisation popularly known as “#Naijaistheparty campaign”.

Mr Noble Igwe, Lead Influencer of the campaign, was quoted in the statement saying that music and dance talents, including Lady Donli and Tomi Thomas, would be paraded during the campaign.

“Known for their strong and independent identity, the talents would use the irreverent approach that is characteristic of the millennial generation to get them to the polls.

“TheElectionNetwork with the support of Ford Foundation and public affairs firm Gatefield, collaborated with the talents to create personal creative content with messages.

“These include: `Voting is the party,’ `Voting is true love’, and come `February 16 is the party’ and a call for their audience to pledge to vote on the campaign website Naijaistheparty.com.’’

Igwe said that the campaign would feature a concert in Abuja on Jan. 19, targeting university campus students and millennials, and would be headlined by a surprise celebrity guest.

“Millennials are the largest voting population but they are irreverent about the issue of politics; if we have to get to them, then we have to speak their language.

“According to him, in the statement he noted that this will mean getting things done in their own way as the campaign will be full of surprises, heavy on user-generated content and deploy proprietary technology that will excite millennials about voting and to help the integrity of the process,”.

TheElectionNetwork is a civic social enterprise that relies on the use of digital media and data-driven journalism to trigger interest around global elections.

The organisation is focused on original digital storytelling and smart coverage of technology, data trends, special features and curated stories that provide great insight into elections around the world he said.