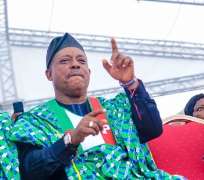 The National Chairman of the Peoples Democratic Party, PDP, Uche Secondus, has challenged President Muhammadu Buhari to come out and engage the people with his record of performance if any and stop hiding in the Villa.

Secondus said that Nigerians must elect a President they can see, feel, a President that can act like the Peoples Democratic Party, PDP flag bearer Atiku Abubakar.

The national chairman, who was addressing a mammoth crowd of party supporters in Lafai Square in Nasarawa state on Thursday in continuation of the party’s nationwide campaign said that President Buhari is hiding in the Villa while college of Presidents operating as cabals mess the country up.

According to a statement from the media office signed by Ike Abonyi, Secondus said that Nigeria can no longer afford analogue leaders in digital era pointing out that PDP flag bearer Atiku is bringing his digital approach to leadership to rescue Nigeria.

He said that while PDP candidates and leaders are engaging the people for votes, President Buhari and APC leaders are hiding in the Villa planning how to rig election.

“But let me reiterate this warning to them including the Independent National Eceltoral Commission, INEC, and security agencies, that any attempt to manipulate the election would be an invitation to a national crisis.

“If they love this county, they must not attempt to thwart the will of the people because it would be a recipe for crisis.

The national chairman also made some scorching remarks on some politicians in Lagos who talk about corruption when they are thieves who have milked the state dry.

“Some thieves from Lagos are also talking about corruption, some of them had nothing before they became governor but today they are stinking in stolen wealth and talking of corruption.

Secondus said that APC has already collapsed with some of their state governors talking with the PDP.

He assured the jubilant crowd of mostly youths that PDP candidate Atiku believes in the vibrancy of the youths, and his administration will be for them because they are the future.

“Your gubernatorial candidate Hon. David Ombadugu is a youth and that shows you PDP’s believe in youths, so caste your votes for him and all other PDP candidates.

The Presidential candidate Atiku, his running mate Peter Obi, the campaign Director General and Senate President Bukola SAraki and the Speaker of the House of Representatives Hon. Yakubu Dogara all in their speeches underscored the importance of voting President Buhari and the APC.