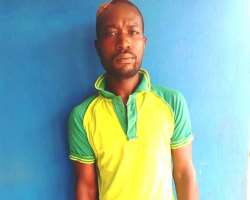 A 33 year old private school teacher Akinsoku Love Olomi has defiled two pupils in Ogun State after using biscuit to trick the little girls, one is 6-year-old and the other is 7-year-old.

The mother of one of the girls, Mrs Jenifer Mustapha said the man who resides at Baba Esther area in Iyesi-Ota, Ado-Odo Local Government area of Ogun state took the advantage of the innocent kids.

She explained that her daughter told her that the man saw her and her friend playing at the premises of the school and called them into one of the school’s classrooms and started playing with them.

Jenifer said “the man gave money to one of children to go and buy biscuit and before the arrival of that one, he has defiled the other girl with him. He then sent the one he had already defiled to go and buy another biscuit and he used that opportunity to defile the second one as well.”

The woman said she noticed the change in her daughter’s countenance which made her to question the girl. Upon the interogation, she revealed that it was Uncle Love as he is fondly called that tampered with her private part.

DSP Abimbola Oyeyemi, Police Public Relations Officer, (PPRO) Ogun State Police Command confirmed the incident to The Nigerian Voice. He said the matter was reported at Onipanu Division and that the suspect has been arrested.

According to him, “Upon the report, the DPO Onipanu Division SP Soganbiyi Johnson led his detectives to the scene where the suspect was promptly arrested. On interrogation, he admitted that he defiled of one of the girls. The suspect claimed that he only fingered the second girl.”

The PPRO said “The two girls have been taken to the hospital for medical examination that would aid investigation. The Commissioner of Police CP Ahmed Iliyasu has ordered the immediate transfer of the suspect to Anti Human Trafficking and Child Labour Unit of the State Criminal Investigation and Intelligence Department for proper Investigation and prosecution”