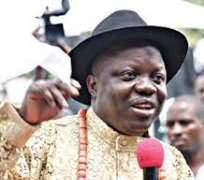 Immediate-past governor of Delta State and All Progressives Congress 2019 Delta South senatorial candidate, Dr. Emmanuel Eweta Udugahan, has said that the achievements of President Muhammadu Buhari in the Niger Delta area and Delta state, in particular, would make his re-election in the February presidential election very easy.

Speaking at the inauguration of the APC presidential campaign council in Abuja on Monday, the former governor said the efforts of the President Buhari-led government have brought relative peace in the Niger Delta region.

“Apart from that, Mr. President also has done a lot in terms of infrastructure and human capital development in Delta state and across the Niger Delta. The railway to Alaja is now functional and of course they have started carrying passengers.

“As at today, there is a lot of work going on at Escravos bar. That was the entry to the Delta state port that was not passable but by the time they finish with it, it will be passable.

“From the human capital development area, we have the N-Power, we have the feeding of our school children, we have the tradermoni and also the empowerment programmes that are being done by the Federal Government. So, we have a lot to campaign within Delta state.” he said.