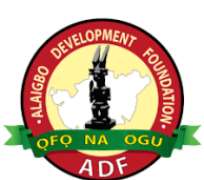 A Two-Day Retreat under the auspices of the Alaigbo Development Foundation (ADF) with the participation of representatives of several pan-Igbo and pro-Biafra organizations as well as major stakeholders in Alaigbo was held at the Crystal Palace Hotel, Enugu.

The Retreat was organized in view of the raging debates on the forthcoming 2019 Federal Elections in Nigeria and its impact on the Future of Alaigbo. Invitations to the Conference was extended to His Excellency Mr. Peter Obi, the Vice Presidential Candidate of the Peoples’ Democratic Party (PDP) and His Excellency Dr. Ogbonnaya Onu, the Honorable Minister of Science and Technology and a Chieftain of the All Peoples Congress (APC). Both men were invited because they are major players in two of the frontline parties –the PDP and the APC, and above all, they are sons of Alaigbo known for their patriotism. The Conveners – the ADF, however regret the inability to invite other sons and daughters of Alaigbo who are contesting for the Presidency of Nigeria.

The participants first reviewed the debate surrounding the anticipated impact of the 2019 Elections on the Future of Alaigbo and whether Ndigbo should participate in the Elections. Special note was taken of the alarming undemocratic measures which the Party in power, the APC, has serially taken steps to ensure that it returns itself to power irrespective of the wishes of the Nigerian citizens. These include the failure of President Muhammadu Buhari to sign the new Electoral Law, the posting of Amina Zakari as the Collation Officer in the Presidential Elections irrespective of the objections of the other parties, the active mobilization of security forces ready to clamp down on the opposition elements who may protest against the rigging of the election, the on-going harassment of leading figures opposed to the Government, etc. 2 2 The dangers of this apparent determination to rig the election and the implications of these on the peace and security of lives of Ndigbo and their neighbors are too frightening to imagine.

On the second day of the Retreat, participants received His Excellency, Dr. Ogbonnaya Onu, the Hon Minister of Science and Technology, a Chieftain of the All Progressive Party (APC) who had been invited to the Retreat along with His Excellency. Mr. Peter Obi, the Vice Presidential Candidate of the Peoples’ Democratic Party (PDP). However Mr. Peter Obi was unavoidably absent due to fight difficulties from Kano to Enugu.

In his address, Dr. Onu urged the participants for the renewal of the spirit of the accord that pervaded the relationships of Ndigbo and their neighbors especially the North. This, according to him, will promote greater understanding in Nigeria. He explained to the participants the rationale for the things that the current government is doing insisting that foundational developments in science and technology are the sine qua non for any futuristic enthronement of Nigeria in becoming a first world country. He however, urged Ndigbo to vote for his principal. He congratulated ADF leadership for the wonderful work they are doing to advance the cause of Igbo Unity and Progress.

In response, the participants expressed serious reservations on the sincerity of the current administration in view of its 7% disposition in appointment of Igbo sons and daughters, the conversion of the security apparatus to a sectional instrument and skewed infrastructural developments of Alaigbo. The participants also expressed grave concern over the inability of Mr President to govern, the escalation of Boko Haram conquest more territories, the herdsmen insurgency and apparent nepotism in handling his anti-corruption program. The most bizarre is his refusal to face other Presidential Candidates, thereby putting in doubt whether he is actually the man in control of the government.

At the end of the deliberations, the following resolutions were made.

1. The participants endorsed the Enugu Declaration of July 29, 2018 as well as Memorandum of the Alaigbo Development Foundation (ADF) on the future of Ndigbo in Nigeria, now popularly referred to as the Green Book. The Enugu Declaration is a demand for the recognition of Alaigbo as an Autonomous Region and Nigeria as a Union of Autonomous Regions, in which each 3 3 Autonomous Region shall be accorded the fundamental Rights of Selfgovernance and Self-determination. If this minimum condition is unacceptable, then Ndigbo shall ultimately declare their right of freedom as an Independent Republic,

2. The participants enjoined Ndigbo to participate in the 2019 Elections in Nigeria, despite the fact that the Party in power has set the stage and serially taken steps to ensure that it must return itself to power irrespective of if the wishes of the Nigerian citizens supports this or not. They called on the electorate to stand courageously firm in defending their fundamental right of choice of those who govern. This right includes freedom of choice, rejection of all acts that may compromise this freedom such as vote-selling and vote-buying. They should resist all forms of intimation and blackmail.

3. The participants re-affirmed the endorsement of the Atiku-Obi ticket and the reasons advanced by the ADF as basis for the choice. The choice, no doubt is a relative one based on Alhaji Atiku Abubakar’s relative liberal nature as well as Mr. Peter Obi’s track record of sincere sensitivity to the cause of economic and social development of Alaigbo. We do not expect their Government to continue the policy of witch-hunting of political opponents, officially-sanctioned harassment of Igbo business men, brazen acts of conquest of the ancestral communities, abuse deployment of the security forces to promote Fulani Agenda, etc.

4. The participants condemn the state of Insecurity in the Federal Republic, assassinations, harassment of political opponents, selective application of anticorruption measures, use of the military in the promotion of Fulani Agenda of territorial conquest of the territory of West Africa, using Nigeria as a beachhead.

5. The participants fully support the call of General Theophilus Danjuma that the citizens should do all in their power to defend their ancestral communities, their lives and their property by any means legitimate and possible.

6. The participants endorsed the proposal to hold an Igbo Global Summit in Chicago in July 2019. The Summit has become all the more urgent in view of the raging ferocity of ethnic and religious jihad sweeping across the Federal Republic of Nigeria, the potential crises that may erupt following the 2019 4 4 Elections in Nigeria as a result of the inordinate determination of the Party in power to rig the election and continue to impose their will on the people.

7. In view of the raging poverty in Alaigbo, the participants endorsed the on-going Akuruo Ulo (Invest-At-Home) Movement and called on the Governments in Alaigbo to provide the enabling environment to promote investment in Alaigbo. They urged all organizations to participate in promoting the spirit and philosophy of Akuruo Ulo and youth empowerment in order to stem the tide of poverty and crime in the Region.

8. The participants endorsed the campaign for reconciliation and unity among Ndigbo and their neighbors in the old Eastern Nigeria and Biafra. They emphasized the need to recognize and promote the common historical, political, economic and cultural relationships among all the people in the Region. The principle of Self-Determination should form the foundation of the relationships among all the peoples in the Region.

10.The participants expressed their appreciation for the presence of Dr Ogbonnaya Onu and his wife and urged him and other politicians in various parties to dedicate themselves to the raging spirit of freedom, self-reliance and self-determination in Alaigbo.

11.Finally, the participants urged all organizations in Alaigbo including the Ohanaeze Ndigbo to work together to advance the cause of unity, Selfdetermination and Self-reliance of the Igbo Nation.