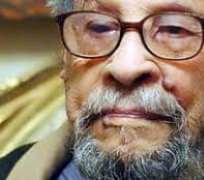 If one can say that writers don’t die, then would be ultimately referring to glaring cases like that one of the Egyptian Nobel Prize laureate Naquib Mahfouz, theauthor of Children of Gebelawiwho is still attracting un-blemished attention of the media, readers and publishers a decade on after of his death. The Art &society section in the Egyptian Street has surprisingly revealed that the previously unseen 18 short stories by the late Naguib Mahfouz are to be published on 11 December2018. This has coincided with the 107th birthday of the author. According to Al Ahram and Egyptian Streets, the book is first to be released by the publisher in Arabic and then to be followed by an English translation. So far there is no French translator that has come out.

The translation is to be done by Roger Allen, the longer time friend and translator as well as prefatorial writer to other works by Mahfouz. In the book there is also manuscripts demonstrating Mahfouz’s editing process, which reveal how his handwriting was affected by the knife attack that occurred after they were written and before they were published.The collection of stories was discovered by culture journalist Mohamed Shoair while researching his own book on the controversy around Mahfouz’s novel Children of Gebelawy (1959).

Naguib Mahfouz was born in 1911. He had to spend 70-years in a writing careerwhich gave to the world 34 spell-binding novels and over 350 earth shaking short stories. Naquib Mahfouz is best known for his Cairo Trilogy: Palace Walk (1956),Palace of Desire (1957), and Sugar Street (1957). In 1988, he became the second African to receive the Nobel Prize in Literature, after Wole Soyinka. But he is the only African writing in Arabic to win the literature Nobel Prize. Mahfouz died on 30 August 2006, aged 95. Allen Roger has not yet communicated about date for the publication of the English translation.