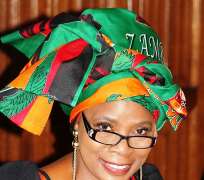 “It is humbling to receive such distinguished recognition of my work. I feel highly blessed to be honoured with such incredible personalities whom I admire greatly”. Says Ms Mutale

According to Tropics Magazine, the 200 Tropics ChangeMakers Laureates are a collection of the most effective business and social entrepreneurs on the planet. The 2018 Powerlist builds on Tropics Magazine's eight years of honouring African Doers, Leading Entrepreneurs and Innovator’s who do things differently. These are personalities who have made an impact in the society and powerful voices who continue to break the mould in Africa and internationally.

“We are proud to announce the 2018 Final Winners, who boldly break the mould to create new solutions, innovations and possibilities that redefine how we live, work and play in Africa”, says Venicia Guinot, Founder & Editor-in-Chief of Tropics Magazine.

Ms Mutale is the Founder & President of the Justina Mutale Foundation and POSITIVE RUNWAY, Global Catwalk to Stop the Spread (of HIV/AIDS).She sits on the Advisory Board of the World Leaders Forum and is listed in the Powerlist of the Most Influential Black People in modern Britain. Ms Mutale is also listed in the top 100 Most Reputable Africans. In 2012, Ms Mutale was honoured as African Woman of the Year. In 2013 she was appointed Global Envoy for Gender Equality and Spokesperson for the International Women’s Think Tank headquartered in Atlanta Georgia in the USA. In 2014, Ms Mutale was honoured in the Global Officials of Dignity (G.O.D.) Awards, which recognises and honours some of the world’s greatest humanitarians and philanthropists at a ceremony held at the United Nations Headquarters in New York. Ms Mutale serves as Ambassador for Peace, Africa Goodwill Ambassador and Missionary of Peace. She was recently appointed Goodwill Ambassador for the International Human Rights Peace Commission (IHRPC), a worldwide humanitarian organization that advocates for, and promotes human rights in observance of the United Nations Universal Declaration of Human Rights.

According to Tropics Magazine, the 2018 Tropics ChangeMakers Powerlist features a group of bold entrepreneurial Leaders and Luminaries. The Winners were shortlisted by an independent judging panel made up of leading business people, leading CEOs, investors and other regional business leaders. Twelve of the Laureates were unveiled at a special Tropics Gala Dinner during the 2nd annual Tropics Business Summit held in Johannesburg, South Africa. For the full Tropics ChangeMakers Powerlist Visit: https://bit.ly/2BNqM7I