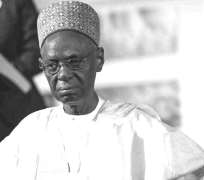 Late former President Shehu Shagari's choice of remaining apolitical for 35 years (since leaving office in 1983) made him one of Nigeria's best qualified statesman since the second republic, Governors of the nineteen northern states have said.

Borno State Governor, Kashim Shettima, who is chairman of the Northern states' Governors forum, stated this in a statement he personally signed on behalf of the forum, which was emailed to journalists on Saturday.

"‎Since leaving office in December 1983, His Excellency, our late father, President Shehu Shagari made the rare and bold choice of staying out of partisan politics in Nigeria, despite his immense popularity in the country. He opted to remain a statesman and a father of the nation and he maintained such a dignified position till his death in December, 2018, making exactly 35 apolitical years.

In all these years, he measured his words and actions as a peaceful and unifying leader. To cap it up, Shagari died in Abuja, the nation's capital which symbolizes our nationalism and unity. Clearly, Shagari lived and died a nationalist and a true statesman.

Governors in the 19 northern states join family of the late former President, the federal government, sokoto state government, northerners and millions of Nigerians to mourn the demise of such an undiluted elder statesman. Although he died at a time his wise counsel was needed, he has bequeathed to us, his documented lifetime of statesmanship, good character, calmness, and selfless interest in the unity and prosperity of Nigeria. Nigeria and Nigerians will miss and mourn Shagari till eternity. We collectively pray that God in His infinite mercy will grant the late elder statesman eternal rest and admit him into heaven. We also pray that God gives his family and all of us, Nigerians, the fortitude to bear the loss of a father to our nation" Shettima said in his statement.