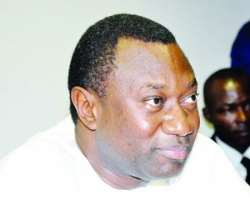 The Chairman of Forte Oil Plc, Mr Femi Otedola, has announced his decision to sell all his shares in the firm's downstream business.

TForte Oil disclosed on Monday the divestment by its majority shareholder in a notice signed by its General Counsel, Mr Akinleye Olagbende.

The notice read in part, “Forte Oil Plc hereby notifies the Nigerian Stock Exchange, Securities and Exchange Commission, shareholders and the investing community that its majority shareholder, Mr Femi Otedola, has reached an agreement with the Prudent Energy team, investing through Ignite Investments and Commodities Limited, to divest of his full 75 per cent direct and indirect shareholding in the company's downstream business.

“Mr Otedola's divestment from the downstream business is pursuant to his decision to explore and maximise business opportunities in refining and petrochemicals. The transaction is expected to close in the first quarter of 2019 subject to the satisfaction of various conditions and receipt of applicable regulatory approvals.”

The firm, however, stated that the notification was not intended to constitute an offer to sell or a solicitation of an offer to buy any of the ordinary shares or any other securities.

“There will be no sale of the ordinary shares or any other securities in any state or jurisdiction in which such an offer solicitation or sale is not permitted.”

Forte Oil emerged the sixth biggest gainer at the end of trading on the NSE on Monday as its share price rose by 9.84 per cent to close at N31.25.

In October 2015, the firm announced that the Mercuria Energy Group Holdings SA has acquired 17 per cent of its equity, valued at $200m.

The firm said in a statement that Mercuria Energy had made inroads into the West African energy sector through direct investment in Forte Oil.

According to the statement, Mercuria is joining forces with Forte Oil at an auspicious time when equitable funding and expertise is needed to expand and intensify its market penetration to give the company the leverage to further create a positive impact for all shareholders.

Forte Oil, formerly known as African Petroleum Plc, operates majorly in the downstream sector of the oil and gas industry. The group has interests in power generation and upstream services.