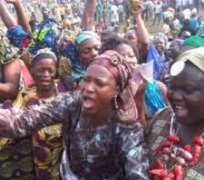 WOMEN farmers in Ebonyi has stated that the 3% budgetary allocation to agriculture by the present administration was not sufficient if the sector was to make considerable progress in the State.

The farmers called on the state government to ensure increased budgetary allocation to the sector in the 2019 fiscal year.

The women who stated this during the Ebonyi State Annual Women Farmers' Forum organized by Participatory Development Alternatives, PDA with support from actionaid at San Diego Hotel, Abakaliki added that the development had over the years reduced the participation of women in farming and the level farm produce across the state.

According to the women who were drawn from 12 local government areas of the State, bad road network, destruction of crops by rodents and herdsmen, insufficient facilities and grants to farmers, low budgeting allocation to Agriculture, indolence on the part of some women farmers among others were some of the challenges facing women farmers in the State.

"We are suffering as women farmers as inadequate attention is being given to us. We are faced with the issue bad rural internal roads even as the Governor is doing his best; this has led to cheap sales of our produce. Destruction of crops by domestic animals and rodents and herdsmen, lack of funds for farming, insufficient farming inputs, facilities, and machines or warehouses for reservation."

In her remarks, a national officer of Small Scale Women Farmers of Nigeria, SWOFON, Mrs. Ibiam Nnenna Oluchi encouraged the women farmers to remain resilient and focused in their chosen profession of Providing food for the nation.

She urged the women to be part of SWOFON so that the benefits accrued to women farmers at the national level could easily get to them in the State.

Also, the Programme Manager of Ebonyi State Agricultural Development Project, EBADEP, Mrs. Anthony Ibe Enwo called on the women farmers not to be discouraged by the challenges facing them but rather key into the myriads of opportunities available to farmers through the policies and programmes of the present federal government.

The Chief Executive Officer, CEO of Participatory Development Alternatives, PDA urged the women farmers not to be indolent but active so that they can excel in their chosen profession and compete favourably with their counterparts in the country.

Highlights of the event include the election of the new SWOFON executives for Ebonyi state.