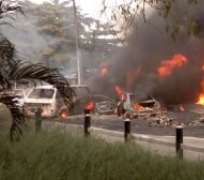 Several people have been reportedly killed after a fuel tanker caught fire on Odo-Iyaalaro Bridge inward Maryland in Lagos.

According to The Guardian, the accident has caused major gridlock around the axis, paralysing  movements around Tipper garage, Ojota-Interchange and Motorways plaza..

The exact  cause of the fire and number of casualties couldn't be ascertained.