By Joint NDI/IRI Delegation in Nigeria 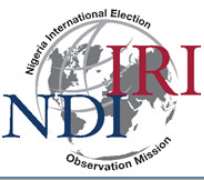 “The 2019 general elections could be another important step in consolidating Nigeria’s democratic development,” said Ambassador Thomas-Greenfield. “The joint NDI/IRI delegation notes the positive efforts being made to conduct more transparent, and inclusive elections, but confidence in the process and the outcome of the elections could still be undermined. Nigerians should know that all eyes will be on Nigeria for the 2019 general elections.”

“While there are less than two months until election day, there are still a number of tangible steps that Nigerian stakeholders should take to promote credible and peaceful elections,” said Ambassador Lucke. “IRI and NDI will deploy joint international election observation missions for the general elections in 2019.”

Today’s statement includes analysis of the electoral environment since the second assessment; the status of recommendations previously offered by NDI/IRI; and issues that could still be addressed between now and election day to ensure more credible and peaceful polls. The delegation encourages Nigerians to continue their efforts to enhance citizen confidence and participation in the election and mitigate violence before, during, and after the polls.

NDI and IRI have organized more than 200 international election observation missions around the globe, earning a reputation for impartiality and professionalism. The IRI/NDI mission to Nigeria will conduct its activities in accordance with the Declaration of Principles for International Election Observation and the Code of Conduct adopted by the United Nations in 2005 and the laws of Nigeria. It also considered international and regional standards, including the African Union (AU) Africa Charter on Democracy, Elections and Governance as well as the Economic Community of West African States (ECOWAS) Protocol on Democracy and Good Governance. All activities were conducted on a strictly nonpartisan basis and without interfering in the election process.