As Senior Advocate, Lawyers Chide Him Over Reckless Abuse Of Court Orders
By The Nigerian Voice 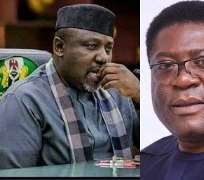 Lecturing Okorocha on request, the Chief Judge told him that in so far as the Court of Competent Jurisdiction had ruled that Prince Eze Madumere remains the Deputy Governor of Imo State, it remains so and enforceable, too.

It will be recalled that last Monday during the grand Occasion of 2018/2019 legal year and Assizes of Imo State Judiciary in Owerri, Imo lawyers, again, booed and shouted down Governor Rochas Okorocha for grossly breaching the protocol while recognizing those in his entourage.

The uproar that lasted for minutes uncontrollably was caused by the Attorney-General of the State, Miletus Nlemedem who despite his presumed long years standing at the bar, in a bid to satisfy his master, introduced one Ekenze Calistus, as the Deputy Governor designate.

Okorocha last month at ohakpu, Oru West local government of Imo State had also drawn the anger of Nigerians and international community when he embarrassingly introduced his aide as a deputy governor designate, leading to uproar even as some people staged a-walk-out in an event.

Meanwhile, prior to the shameful showing of wrongly recognizing an impostor to Imo Judiciary at Assizes, Chief Mike Ahamba, Senior Advocate of Nigeria in his remark had reeled out catalogue of Okorocha’s violations and abuse of court orders, tacitly describing such as dangerous to democracy and an anathema to any civilized nation.

He said: “There is nothing in the polity that can be rightly considered to be democratic without a very deliberate submission to the Rule of Law both by the rulers and the ruled, which includes submission by all and sundry to the authority of all agreed institutions in the polity, particularly the Judiciary institution.”

The Senior Advocate enumerating Okorocha’s gross abuse of court orders mentioned incessant illegal acquisition of private property, illegal demolition of eke-ukwu Owerri among many others despite ongoing court processes. He also recalled Okorocha’s arbitrary stoppage of the process of appointing new Judges in the State, an action he said would have created eternal damage for the judiciary were it not for intervention from the commission.

He described Okorocha’s unusual style as malicious governance intended to create the greatest unhappiness of the greatest number, a situation where everyone is being forced to dance to Okorocha’s crude music, insisting that only the independence of the judiciary can guarantee a true check and balances in the system to avoid the present situation in some states like Imo. He said that such can only be achieved by granting the Judiciary a Financial Autonomy.

He therefore commended President Buhari for constituting a committee to facilitate its workability, urging for the immediate inauguration of the committee so as to enable them expedite action towards achieving the set goal of financial autonomy of the critical arms and tiers of government.