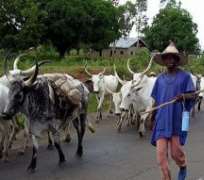 The Miyetti Allah Kautal-Hore, a Fulani socio-cultural association, on Tuesday called on the Federal and State governments to secure grazing reserves across the country, to curb farmers/herders crisis.

National President of the group,  Alhaji Bello Badejo made the call in Sokoto during a courtesy visit to the Gov. Aminu Tambuwal.

He said that most gazetted grazing reserves had been appropriated by farmers and should be retrieved by government.

“The Federal Government should bring back our grazing reserves, some are gazetted and some are not.

“We do not know the reason why the the government is delaying the preparation of the grazing reserves so that cattle herders can go back to their grazing areas.

“ We have the national and the international cattle route, where are they now? This is because the government is not serious about the reserves.

“We are saying that if these ranches are in place, farmers and herders crisis would have been resolved most significantly,” he said

Badejo alleged that of recent, the National Economic Council gave Kaduna State Government N5 billion to build ranches, which he claims are yet to be seen.

On politics, the Fulani leader said the group has not endorsed any presidential candidate, because none of them has unveiled any agenda for herders.

He regretted that while the Federal Government have many intervention packages for farmers, including soft loans and distribution of fertilizer, nothing is done for the cattle herders.

“Endorsing any candidate is a very difficult position for the association to make, noting that President Muhammadu Buhari is Fulani and his main rival, Atiku Abubakar is also Fulani.

“What we want is just a solution to national problems, so that peace reigns,” he said.

Badejo flayed the media for its bias reporting of the crisis involving farmers and Fulani herdsmen in the country.

He reiterated that the false propaganda against the Fulanis would not address the problems, and stressed that the association is always ready be part of genuine efforts to end the recurring crisis.