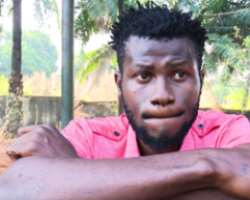 Ogbonna, a serving member of the National Youth Service Corps (NYSC),  is facing a five-count charge bordering on intent to defraud, and possession of fraudulent documents contrary to Section 6 of the Advance Fee Fraud and Other Fraud Related Offences Act 2006 and punishable under Section 1 (3) of the same Act.

Ogbonna's arrest was sequel to series of raids carried out by operatives over the past one week in which several suspected fraudsters in their early 20s, alleged to be engaging in online fraud, were arrested having been found to be living a flamboyant lifestyle not commensurate to the means of livelihood.

Analysis carried out on the computer of the suspected fraudster revealed certain incriminating documents intended to be used in swindling gullible Nigerians and foreigners alike.

One of the documents was addressed to one Alan Christopher of BG Group Plc, Thames Valley Park, Reading, RG6, Berkshire, United Kingdom, with a rider “Your attention is needed” and a second paragraph talking about a £12,500,000 (Twelve Million Five Hundred Thousand Pounds Sterling) unclaimed contract fund.

Another document found with the accused was a purported “Contract Award Certificate” to one Michael Morgan of 101 Brooklyn, New York, United State of America, on “Directing and Fixing of Oil Spillage” in the Niger Delta signed by the Chairman, Contract Tender Board and Chairman, Legal Department of Chevron Nigeria.

He pleaded “not guilty” to the charges preferred against him occasioning his counsel E.O. Isiwu to move a motion for bail, which was opposed by prosecuting counsel, Innocent Mbachie.

The presiding judge, however, granted bail to the defendant in the sum of N500,000 and one surety in like sum. The surety, he ruled, “must have a landed property in Enugu which must be verified by the Commissioner of Lands”. Ogbonna is to be remanded in prison custody until he fulfils his bail conditions.