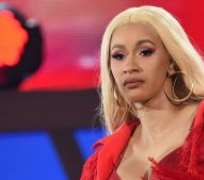 From Cosmopolitan
Get ready to feel extremely uncomfortable, because Offset just made a very public and dramatic romantic gesture to get Cardi B back, and she was…less than thrilled.

ICYMI, Offset and Cardi recently  announced that they were getting a divorce , and right after some cheating accusations against Offset surfaced. But apparently Offset isn’t too into this whole divorce situation, because not only has he been  posting on Instagram about how much he misses Cardi , but last night he also thought it would be a great idea to hop on stage at one of her performances and ask for her to take him back.

So during Cardi’s set at Rolling Loud in Los Angeles last night, Offset hopped on stage and rolled out signs that said “Take Me Back Cardi.” Cardi wasn’t having it though, and even looked kind of pissed about the whole situation-but you be the judge:

Afterwards, Cardi posted a video on Insta addressing her drama with Offset, saying “I just want things to die down, I just need time so we can see eye to eye…I can’t predict the future.” Cardi also implored her fans to stop bashing Offset online, saying “at the end of the day, that’s still family” and that “the whole coming at my baby father doesn’t make me feel any better.”

She thanked her fans for the support and love, and then a few hours later posted another video saying that she wasn’t defending Offset because they’re going to get back together-rather, she said “I know how painful it is when you have millions of people bashing you every single day” and that she didn’t want Offset to have to deal with those “nasty” feelings.

So basically, even after being interrupted onstage by Offset-which some might call him disrespecting her and her work-and maybe being cheated on by him, Cardi is still out here being considerate of his feelings. That is one strong and classy woman.