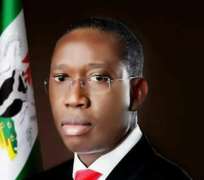 Succour is on the way for motorists plying the Ughelli/Asaba Road as the Delta State Government has approved the completion of the dualization of (Section C2), Ogwashi-Uku to Asaba axis of the road.

Speaking after the State Executive Council (EXCO) meeting presided over by the State Governor, Senator Dr. Ifeanyi Okowa, in Asaba on Tuesday, the State Commissioner for Information, Ogbueshi Patrick Ukah, stated that majority of the decisions taken were in line with the determination of the State Government to take advantage of the dry season to achieve a Lot in construction of roads.

According to the Commissioner for Information, the construction of Engr. Oyubu Godspower Street to link Ibori Road in Oghara, Ethiope West and that of Kpakiama link roads in Bomadi Local Government were equally approved

Other roads that got the nod of the EXCO are the construction of Obi-Ogo Eziokpor/Umuoshi Eziokpor Road in Ukwuani Local Government, that of access road from Otumara Road to Western Delta University, Oghara, Ethiope West, Egbo bypass, Igbide, Isoko South, Niki-Tobi and Market Roads, Essama in Bomadi Local Government.

Ogbushi Ukah further disclosed that the state Commissioner for Basic and Secondary Education, Hon. Chiedu Ebie, informed members of EXCO of the flag-off of the training programme for Principals and Teachers by the wife of the Governor of the state, Dame Edith Okowa.