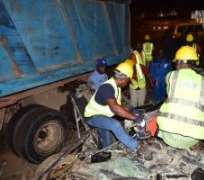 Four people were crushed to death on Ibadan-Oyo expressway on Monday when a trailer rammed into a taxi at a failed portion on the expressway.

Other motorists burst into wailing on sighting corpses of the accident victims which occurred near the overhead bridge in Akinyele area of Ibadan, the Oyo State capital.

The trailer was said to have rammed into the taxi which slowed down to navigate through the failed portion. Eye witnesses said the accident was as a result of the trailer's brake failure which made it impossible for the driver to avoid hitting the vehicle. Both the corpses and two other occupants, who sustained varying degrees of injury, were taken to State Hospital, Adeoyo.

The accident, which occurred at about 12:15 pm, led to massive traffic gridlock on the busy road. Several portions of the road have failed near Ibadan, making it dangerous for motorists, especially at night.

When contacted, the Public Relations Officer (PRO), Federal Road Safety Corps (FRSC), in Oyo State, Mr Seun Onijala, confirmed the incident. He said a team of the the corps' men in Akinyele had been dispatched to the scene as at press time. Onijala assured that normalcy would be returned within hours, urging motorists not to panic about the traffic situation.