Police nab man who killed pregnant girlfriend, buried her in his room 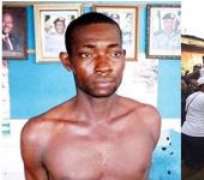 The cold but sure hands of the law have finally caught up with a young man, Mr. Prince Owabie, popularly called J-boy, who allegedly killed and buried his  pregnant girlfriend  in his room.

The Guardian reports that the victim, Miss Betha Ogbede, was murdered and buried in her lover's one-room apartment in Rumuepirikom community of Obio/Akpor Local  Government  Area of the state, during her recent visit to Owabie.

According to the report,  the incident occurred on Sunday, but the suspect was arrested yesterday, by policemen following a tip-off. The  Divisional  Police Officer (DPO) in charge of Rumuepirikom  police station , CSP Emmanuel Wagbara, disclosed that a case of  missing person  was filed by relative of the victim, who reported that her sister had been missing for a week after her alleged visit to her boyfriend.

The DPO said the suspect was  invited  and interrogated on the whereabouts of the deceased. He admitted that Ogbede was in his house but later left for her home and that he had not heard from her since she left.

He said: “We were not satisfied with his response. So, early yesterday morning, we decided to  conduct  a search in and around his house and there we discovered a shallow grave in his room. It was then he confessed to us that the girl was buried in the grave.”

Wagbara added that the suspect had already been arrested and was assisting the police in their investigations.

Neighbours  of the suspect said Owabie is a habitual woman beater, adding that he usually beats his girlfriends.

The deceased  cousin  said the victim went to pick her personal belongings from Owabie's residence last Sunday when a hot argument ensued between them, leading to a serious fight, which led to her death.

“It was as if she knew that J-boy was going to kill her. This is because she informed her sister of her whereabouts before leaving for the suspect's house. At a point into the fight, she called her sister from her boyfriend's house with a tearful voice that he was going to kill her. The sister could literally hear the sound of the boy hitting the victim as she kept shouting and crying.”

The Rumuepirikom community youth leader, Nyemanu Onuoha, described the incident as unfortunate and promised that the youths would ensure that justice takes its course. Sources said the body of the slain pregnant lady was yet to be exhumed from the suspect's apartment. Security men have been  deployed  to the suspect's compound to prevent any breakdown of  law  and order.