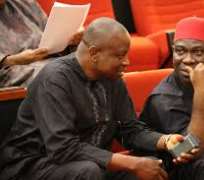 Key members of the Peoples Democratic Party (PDP), from Igbo-Eze North Local Government  in Enugu State recently blessed the gubernatorial ambition of their son,  Senator Ayogu Eze, who is the Governorship candidate of the All Progressives Congress, APC.

They offered to work for his victory during the 2019 general elections.

In a very emotional chit-chat yesterday in Abuja the political gladiators embraced Senator Eze, and described him as the best candidate to take Enugu to the next level.

They further offered to provide all necessary support to ensure Eze wins the governorship election holding in March next year, their membership of the opposition Peoples Democratic Party notwithstanding.

Responding, Senator Eze assured them that  Enugu under his leadership will experience unprecedented transformational development while  getting  its fair share of presence from the ruling party at the Federal level.

Eze added that he has designed a  robust programme of action that will boost economic growth in Enugu  and take development  to all the nooks and cranies of the state.

He also assured workers of prompt payment of salaries, gratuities and pensions to ensure that retirees will have no cause to regret having utilized their youthful energy in the service of their State.