… I Am Still In Governorship Race, Esanubi Dismisses Quitting
By Kenneth Orusi, The Nigerian Voice, Asaba 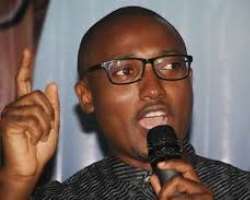 Ahead of the governorship election in Delta State, there are speculations that one of the gubernatorial candidates, Frank Ufuoma Esanubi, has purportedly quit from the race.

News filtered into town that the governorship candidate allegedly abandoned his guber dream following his alleged disappearance from the public domain in the recent time.

Unconfirmed sources said the party, Action Democratic Party (ADP), under which he declared for his governorship ambition allegedly picked another candidate whom they said is more sellable.

In his reaction, the governorship candidate disclosed that he only dumped his former platform, Action Democratic Party (ADP), for a new platform, African Action Congress (AAC), to achieve his dream of serving Deltans.

Esanubi who spoke Wednesday in a telephone conversation with The Nigerian Voice through his Chief Press Secretary (CPS), Mr. Monday Iyke, told our correspondent that his principal was in Kwale, Ndokwa west local government area of the state for consultation.