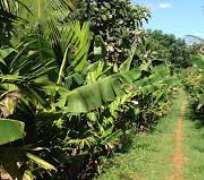 Nature farming also known as organic agriculture, refers to a system of farming where very little as permitted by the International Federation of Organic Agriculture Movement (IFOAM), or no synthetic farming material is used in the entire farming process. It refers to a system of farming which does not interfere with the agroecology and biodiversity of the environment and involves the use of majorly natural input in the farming process. Nature farming depends on the ability of the ecosystem to support crop growth and development without the necessary addition of non-natural or synthetic material. It depends on the natural soil fertility rebuilding ability of the ecosystem for soil fertility. It equally depends on availability of natural predators of pest of crops to exterminate or keep crop pest at minimal level which would not hinder crop growth and development and it also depends on the natural resistance of the crops to defend crops against diseases.

Harnessing the potentials nature farming will demand using a combination of what the natural system can offer together with scientific knowledge gotten through extensive research which will guarantee a healthier, sustainable, human and eco-friendly farming which will be more acceptable.

Doing this will require us to restore the time-tested soil and agricultural (farming) principles and practices. This include smart natural soil fertility restoration techniques and disease prevention through cultural practices. Implementation of such will require re-training farmers on management of their lands without a heavy energy and toxin input and building back the fertility of farming soils so that natural productivity is re-established.

Sustainable crop production can best be achieved when the materials needed for crop production are practically inexhaustible and their usage will not jeopardize it usage by posterity. Nature farming uses nature’s input to sustain production. These materials are recycled in nature and thus can almost be described as inexhaustible. Furthermore, being an eco-friendly farming system, it total eliminate chances for the deterioration of the ecosystem (especially the soil ecosystem) renders it incapable of sustaining agricultural production. Interestingly also, nature farming remains the most viable way of rebuilding degraded soils (which resulted from consistent mechanized farming) in terms of nutrient retention and soil health. For instance, when soil losses its free cover and the inputs of organic matter to feed the living organism within the soil, the fertility goes down and the overall plant health of the soil losses its cohesive strength. The loss of cohesive strength accelerates erosive processes which are brought about through the loss of soil binding agents. This situation cannot be remedied by inorganic fertilizers as they are equally washed off or leached down the ground at even faster rates, but only through manuring with compost and animal dropping. This demonstrates that organic fertilizer (manure) used in nature farming doesn’t only fertilize the soil but preserve it and encourage nutrients retention. Some farmers who understand this go ahead to mix inorganic fertilizers with organic manure so that the manure can retain soil moisture, structure and fertility while adding sustained fertility to the soil. These farmers equally understand that there are periods where inorganic fertilizers are not only scarce but very expensive. During this time, most farmers who are totally dependent on inorganic fertilizer will either suspend farming or reduce their farming area unlike their counterparts who are nature farmers who have their manure cheaply supplied by nature in forms of green manure and animal dropping. This will guarantee sustainable all-year round production with minimal soil fertility depletion.

The wealth potentials of nature farming for Nigerian farmers

It is no doubt that nature farming is obviously the cheapest form of farming as lots of cost are saved. Cost in terms of the more expensive chemical fertilizers are saved by the use of the cheaper and equally effective organic fertilizer (manure). Besides, the fact that chemical fertilizers are more easily leached down the soil and thus lost from the plant reach means that more and more of the fertilizer must be added in a particular planting period to be able to maintain the fertility needed to support a good yield. This is unlike organic fertilizer where a well formulated organic fertilizer needs to be added only once to the soil to cater for the entire planting season and even some of it continues through the next season thus enhancing sustainable production.

Interestingly too, chemical pesticides and herbicides are known to be significantly costly and farmers incur a lot of cost in using them. Nevertheless, organic herbicides and pesticides are significantly cheaper and eco-friendlier than the former. Cultural practices like cover cropping with mucuna beans and mulching with dried weeds can equally control weeds effectively thus saving farmers lots of cost.

Another, striking relevance of nature farming in commercial farming is that cover cropping, mulching and heavy manure addition is the major if not the only way of recovering the soil structure and top layer which is mostly destroyed by mechanized farming. This means that adoption of nature farming by commercial farmers can correct the inevitable consequences of mechanized farming as stated above.

Moreover, the ease of handling organic material input in nature farming is high than that of chemicals involved in the conventional inorganic fertilizer. For instance, most organic materials are non-corrosive unlike chemicals. Also, excessive addition of organic fertilizers or pesticide are likely to have far lesser consequence than the inorganic chemicals. This makes nature farming to be less risky than inorganic.

Most important here is the fact that the prices of most organically produced foods are almost double the price of those produced inorganically. This clearly presents a high profit-making opportunity for farmers engaged in nature farming. This equally means that commercial farmers can make almost double the amount they are currently making if they practice nature farming and have their products certified organic. Beside engagement in organic food production opens to the farmer, the market of those countries that have place ban on the importation of non-organic foods.

There are three major methods of preparing manure in nature farming. These include; tilling green vegetation under the soil, composting fresh and dried vegetation and composting of animal droppings.