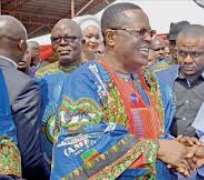 Father Mbaka while addressing a mammoth crowd at the Adoration Ground, Enugu yesterday as part of activities marking their 2018 Harvest and Thanksgiving described Governor Umahi as the “David who killed

Goliath”
He said Umahi through his uncommon transformation has made Ebonyi state the best state in the country and fastest growing economy in the entire zone and called on all opposition to allow the governor complete his good works.

“Governor Umahi is doing well, it shall be well with David, God said He will make a tree to germinate in the House of David and we have a David here, the David of Ebonyi State. I have never met this young man before but the last time I went to Ebonyi, I couldn’t recognize what I saw”

“I went in the day time and returned in the night and when I got to Abakaliki, I saw a beautiful city, with so many flyovers, interconnected road networks built on concrete, fountains and light everywhere. God has blessed Ebonyi state. Before, people who came from that state were not proud to say they came from Abakaliki, but today, Umahi has made Ebonyi person to be proud to say, I am from Ebonyi State”

Speaking while declaring open the 2018 Harvest and Thanksgiving, Governor David Umahi said he was fulfilling the promise he made to Ndi Ebonyi during his electioneering campaign of leading the state with fear of God and prospering the state with word of God to become the industrial hub of the entire country.

He said he came to Adoration ground for the first time by the invitation of Fr. Mbaka and promised to return to the Adoration ground and build a project in the place on behalf of the state government.

Governor Umahi was accompanied by his wife, Rachel Umahi, deputy Governor, Dr. Kelechi Igwe and wife, Speaker and members of Ebonyi State House of Assembly, Executive Council members and National Assembly members as well as traditional rulers and elders of the state among others.